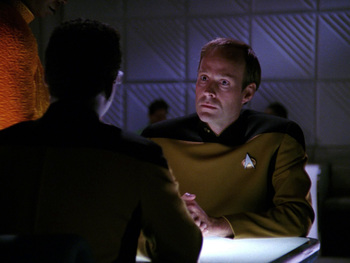 We're introduced to Lieutenant Barclay, who's drinking in Ten-Forward when La Forge shows up to dress him down. After some tough talk worthy of a Dixon Hill story, Barclay shoves him ass-over-teakettle. Riker jumps up and confronts Barclay but gets more of the same. Barclay's overwhelming manliness has impressed Troi, and the pair start to romance each other, but then Barclay gets summoned to the cargo bay. What's going on? This whole sequence has been a wish-fulfillment fantasy on the holodeck. When Barclay arrives for work, he proves to be a meek, awkward, and unpopular officer. As Barclay fumbles with trying to move some canisters of volatile chemicals, during which a couple of them break (remember this), La Forge and Riker discuss how they just can't handle "Broccoli" (thanks for the nickname, Wesley), saying he isn't Enterprise material.

La Forge and Riker go to Picard with their concerns and suggest transferring Barclay off the ship. But Picard doesn't like the idea of giving up and foisting Barclay on someone else. He tells La Forge to stop calling the man "Broccoli" behind his back and start nurturing him to help him fit in. La Forge dutifully starts including Barclay on Engineering briefings and puts him in charge of solving some issues with odd malfunctions cropping up around the ship. La Forge comes to realize that Barclay is a smart, imaginative guy when he's not too shy to speak up. After stumbling into one of Barclay's escapist fantasies on the holodeck, in which Barclay is a badass swordsman against Musketeer doppelgangers of Picard, Data, and La Forge himself, La Forge has a heart-to-heart with Barclay and insists that he get some therapy.

Barclay's intense crush on Troi makes his first therapy session with the real counsellor too awkward. He ends the session abruptly before running off in embarrassment. Troi tells Riker and La Forge about the strange end to their session, causing the three of them to go looking for Barclay. He's fled into the holodeck, where the three officers discover yet another of his programs. Riker and Troi are not amused by the unflattering representations of them in Barclay's fantasy. Barclay is embarrassed to be caught once again and offers to resign, but La Forge won't hear it. He reveals that he himself once fell in love with a holodeck program, but it’s time for Barclay to knock it off and focus on his real-world responsibilities.

The malfunctions throughout the ship are getting worse to the point that the navigation controls stop responding, causing the ship to start accelerating out of control. If Engineering doesn't find a solution in 15 minutes, the engines will blow up. La Forge leads a brainstorming session with all his best engineers and Barclay. But Barclay is the one who realizes that if the problem isn't a systemic error, then it must come from one of the engineers spreading some foreign substance around the ship. La Forge and the rest of the team narrow down the culprit to invidium from the broken canister at the beginning of the episode. La Forge and Barclay rush to the cargo hold and confirm their theory, then recommend flushing the ship's engines to neutralize the compound. The ship is saved!

Barclay arrives on the bridge and announces that he's come to the hard decision to leave them forever, but it turns out that he's talking to his holodeck programs rather than the real crew. He ends the program and erases all of his programs, but with a sly grin decides to keep "number nine" for a rainy day.