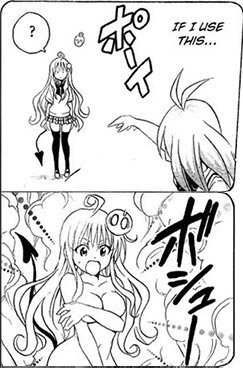 "Can you not solve anything without blowing people's clothes off?!"
— Asuna (to Negi), Negima! Magister Negi Magi
Advertisement:

This is a device, whether magical or advanced technology, which exists with the sole purpose of getting rid of clothes. Mostly because Naked People Are Funny and for Fanservice, though it's also the Logical Weakness to Superpower Costumes and Clingy Costumes.

May result in a Naked Freak-Out. If deliberately used in a fight, it's Defeat by Modesty. Compare Clothing Damage and Wardrobe Malfunction, when clothes are ripped or torn off as an incidental side-effect, often in an action scene. Note particularly that if something breaks bones, tears skin and/or destroys the surrounding area it is not this trope; it's just damaging clothing along with everything else.

Moths often serve this function in comics and cartoons. While there is a real-life clothing moth

whose caterpillar-like larve will sometimes eat through sweaters and other woolen items over time, the cartoon version will swarm and strip their unwary victims in seconds (usually just down to their underwear in kid-friendly shows). Also, the cartoon version is highly likely to show adult moths eating clothing, where in Real Life, it's the caterpillars that eat clothing while the adults stick to eating nectar and pollen like other moths and butterflies.

Compare Can't Take Anything with You, where clothing destruction is a side-effect of time travel.

Contrast Gorgeous Garment Generation and Empty Piles of Clothing (in which attacks harm people without affecting their clothing).