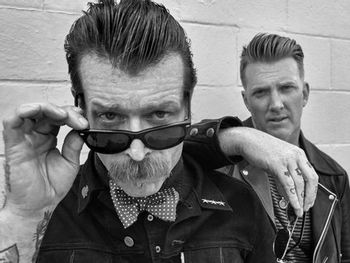 Hughes said that a friend was trying to introduce Josh Homme to the death metal genre. When he played a song by the Polish band Vader and made a claim that the song was death metal, Homme called them "The Eagles of death metal". After hearing this phrase, he wondered what a cross between the Eagles and a death metal band would sound like. In a 2003 interview, Homme described the sound of the band as a combination of "bluegrass slide guitar mixed with stripper drum beats and Canned Heat vocals." Jesse Hughes is known and loved by fans for his enthusiastic and charismatic interaction with audiences at live performances.

They were performing at Le Bataclan theatre in Paris when it was attacked by Daesh terrorists on November 13, 2015 with 90 people in attendance being murdered. The band's performing members managed to escape the attack. They cancelled the rest of their 2015 European tour and returned to the United States.