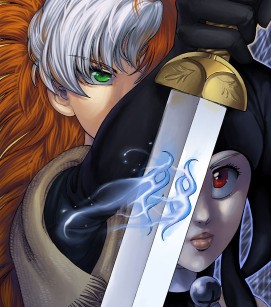 is a long-running webcomic written and illustrated by Brion Foulke.

The comic is about four characters and their quests:

Together, they take on the challenges of a world ruled almost entirely by sorcerers, where dark magic and abuses of power run rampant. Their greatest obstacle, however, may end up being their conflicting natures.

The comic contains female nudity and therefore external links may be NSFW.

No relation to the town between dimensions in Super Paper Mario.

Tropes related to both comics:

Tropes related to the main comic: