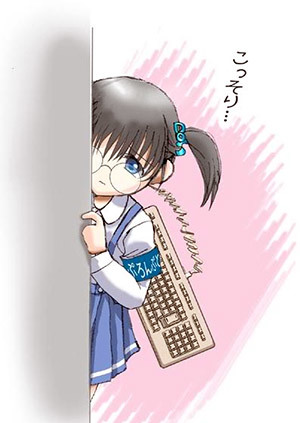 Rick: Sort of defeats the purpose, doesn't it?
Alice: What?
Rick: The mirror. You can't see yourself in it.
Alice: I don't want to.
— A Nightmare on Elm Street 4: The Dream Master
Advertisement:

Painfully shy and quiet, the Shrinking Violet is the withdrawn character, usually but not always female, who walks through the school hallways with her head down and wants nothing more than to blend in with the scenery to avoid all attention because she believes that her presence is worthless or unwanted. Often The Quiet One. Expect her to apologise a lot. She will usually be better than average in scholastic classes, and her appearance will often be pretty in a bookish sort of way, although not all shrinking violets need to be geniuses or nerds. Bonus points if she has long dark hair that hides her eyes.

The reasons for her (lack of) self-confidence vary, but they usually include intimidation (or bullying) by the popular ones, or being the youngest and more sheltered daughter in the family, or in more dramatic cases, a personal event that convinced her that the world would be better off if she just shut up. In other cases, the Shrinking Violet actually manages to avoid the brunt of fights or taunts that more vocal outcasts take, presumably because she's so quiet that she might as well be invisible.

Some Shrinking Violets will accept their status, but be plagued with that nagging feeling that they can be more than they assume. Other Shrinking Violets will hate their crippling insecurities and want to reach out to others, but be paralyzed by fear of rejection. Unlike The Snark Knight, they didn't choose to be alone, but feel powerless to change it. They may even harbor a secret crush on a popular male classmate, or even on a male classmate who frequently gets picked on, which they, time and time again, cannot spit out. Prone to blushing. Some versions may be Prone to Tears as well, while others are better at repressing their emotions.

One advantage to being the Shrinking Violet is that, being outside the viciously popular circle, the few friends she manages to make are the loyal, lifelong ones who'd give their right arms to help a true friend in need. Which they will, because the Shrinking Violet is invariably of the sweet-tempered, delicate type who makes a great friend and a lousy criticism taker from the Alpha Bitch or her Girl Posse.

In the end, the Shrinking Violet will always find her inner beauty and strength with the help of her newfound friends (or lover), Grow a Spine, and blossom into a mature, self-confident woman who would make her parents proud. Well... not always. But generally. Sometimes the shy exterior remains towards strangers, and it's only the new friend (and the audience) who gets to see the wonderful person inside. The Beautiful All Along discovery is optional, but highly recommended.

In stories taking place in an Asian-like place, particularly Japan, the Shrinking Violet may grow into a Yamato Nadeshiko; still unassuming and possibly quiet, but no longer weak. Silk Hiding Steel is another possibility, which her reputation as this trope will strengthen.

In rare cases, a Shrinking Violet's mousiness will conceal a malevolent and/or violent personality. Sometimes, this is also used to conceal the extremely creepy Uncanny Valley Girl.

A male version of this trope may be treated as an instant Butt-Monkey for everyone to martyr, or just called out as an emo (unlike the female one, who is so sympathetic that beating her up or even yelling at her is akin to a MAJOR offense for her friends), or he might be given the role of sympathetic Plucky Comic Relief and overlap with a Lovable Coward. A male Shrinking Violet protagonist will usually face a conflict that finally forces him to come out of his shell, or he'll be thrown headlong into sociability and adventure at the start of the series by a Genki Girl, Magical Girlfriend, or Manic Pixie Dream Girl. However, straight examples are not uncommon, especially for younger boys.

If two Shrinking Violets fall in love with each other, expect them to be Twice Shy.

Friendless Background can cause this.

Little Miss Shy would rather hide under a table for hours than interact with someone.

Little Miss Shy would rather hide under a table for hours than interact with someone.