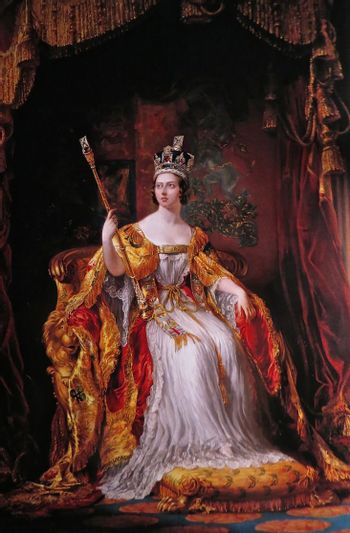 "All men need something greater than themselves to look up to and worship. They must be able to touch the divine here on earth."
— Sir Francis Walsingham, Elizabeth
Advertisement:

A woman of wealth, power, and near-impossible beauty. She always has a calm demeanor and regal bearing. Her very voice, even if it does not ring with power (and it often does), still lets you know that, in some way, she is probably better than you, even if the lady herself does not look down on you at all.

Her beauty can often be so great, even simple robes look majestic on her.

Her beauty and goodness are usually to be admired passionately but from some distance. The High Queen is rarely a love interest, but the few times she is, expect a little warming up due to the charms of the hero.

A common characterization for non-evil regnant queens, princesses (the more mature ones), and goddesses (especially the non-evil/bastardy ones). May also be the polar opposite of the Rich Bitch. This is what The Ojou and Princess Classic want to be when they grow up. If she can fight, she is a Lady of War. Sometimes we get to see glimpses — or the whole story from the POV — of The Woman Wearing the Queenly Mask. She is also very likely to have a Lady and Knight relationship with one of her subjects at some point. For the others, she typically commands such high respect and devotion that her subjects will march to and fight at the Gates of Hell without question if she needed them to.

The presence of a High Queen is sometimes an indication of a Matriarchy. The Iron Lady is the non-royal version of this trope; because non-royals are not born with their position, they have to fight for them and such characters generally combine elements of The High Queen and God Save Us from the Queen!. If she literally fights, she, too, is a Lady of War. If her fighting is more indirect and subtle, she is Silk Hiding Steel.

Despite the name, this is unrelated to The High King. In terms of the ranks of Authority Tropes, the tropes that are equal are God Save Us from the Queen! (her Evil Counterpart), The Woman Wearing the Queenly Mask, She Is the King, Iron Lady, The Good King (her Spear Counterpart), and President Evil. The next steps down are Princely Tropes (Prince Charming being its ground zero) and Princess Tropes (ditto Princess Classic). The next step up is The Emperor.