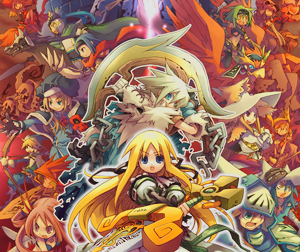 Yggdra Union: We'll Never Fight Alone is a Turn-Based Strategy game which is part of Sting Entertainment's Dept. Heaven cycle. The Game Boy Advance and PSP Updated Re-release were both handled in North America by Atlus.

Chronologically the first of the Dept. Heaven games, Yggdra Union takes place during a war between the Kingdom of Fantasinia and the New Bronquian Empire. Gulcasa, the Emperor, has just defeated most of the Royal Army and slain the king, but Princess Yggdra (the only surviving member of the Royal Family) escapes her captured city with her family's Ancestral Weapon and goes about gathering allies to take her country back—and get revenge. It doesn't hurt that said Ancestral Weapon, the Gran Centurio, is a national symbol of justice. Whatever Yggdra and her army do, it's obviously the right thing.

Except that our heroes slowly discover that Emperor Gulcasa and his villainous minions are a bit more morally ambiguous than they first bargained for, and that everyone they fight seems to be fighting for the justice they believe in. And that maybe there's more going on across the continent than they could have imagined.

Yggdra Union, in short, is a deconstructionist game about war, ideals, and the true nature of "justice".

; be warned that there are spoilers up through the end of the PSP version. See also Yggdra Unison, the Alternate Universe cellphone/DS spinoff.

A prequel called Blaze Union concerning the events of the Bronquian revolution was released in May 2010. Gloria Union is spin-off set in another continuity, sporting a story more light-hearted in tone.