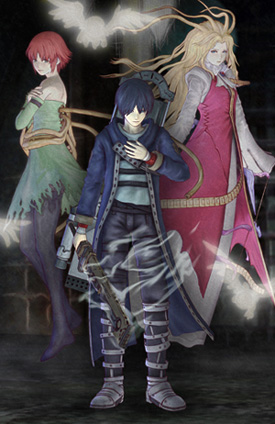 Go to the Neuro Tower
Heal your sins
Heal the world
Advertisement:

A post-apocalyptic horror Roguelike first made for the Sega Saturn, then ported to the PlayStation. It was later remade for the PlayStation 2 and the Wii, and then again for iOS. It was created by Sting, the developers of the Dept. Heaven series, and localized by Atlus.

Baroque takes place in a post-apocalyptic future after a world-altering cataclysm called The Blaze caused The End of the World as We Know It. The only things left in this world are people who survived by clinging to their Baroques (a sort of crystallized ideal or self-image), and Meta-Beings whose mind, body, and souls have been warped by distortions.

A young man suddenly finds himself in this wasteland, mute and without memories after an unspecified trauma. He is given a large shoulder-mounted cannon by a mysterious being known as Archangel, and told that if he wishes to find redemption for a grievous sin he committed in the past, he must travel down to the bottom floor of an Eldritch Location called the Neuro Tower and use the cannon to purify the insane Absolute God that resides there.

It's rather bizarre, to say the least.

The game operates similarly to Breath of Fire: Dragon Quarter, in that you are expected to die on your first few attempts to overcome the Neuro Tower, but each New Game+ unlocks new scenes and reveals deeper mysteries to be solved. Even though you start each run at Lv.1 with none of your items, you can use the Consciousness Orbs scattered amidst the Neuro Tower to "store" items for future playthroughs: strategic use of this and the Item Crafting feature is the key to conquering the game's challenges.

Go play it. There is meaning to you playing it.