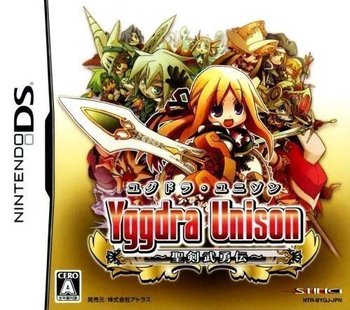 Originally a real-time tactical MMO playable on the cellphone, Yggdra Unison: Beat Out Our Obstacle allowed players to take control of any army from Yggdra Union and engage in competitive battles with opponents all over Japan. Because it was made for the cellphone specifically, the game never left Japan.

Happily for fans the world over, Sting announced that a Nintendo DS remake of the game (entitled Yggdra Unison: Holy Sword Stories) would be released in December of 2009, featuring a new story mode and various unlockable features. The remake no longer features any cooperative or competitive multiplayer modes, though.

In both of its incarnations, Yggdra Unison is a non-canonical Alternate Universe retelling of Yggdra Union similar to such games as Fate/unlimited codes—it retells the story of the war from a number of possible perspectives, asking "What if so-and-so were the main character?" and introducing many changes to the storyline along the way. For the most part, it also happens to run on Rule of Funny. There are twelve playable characters—Yggdra, Milanor, Gulcasa, Emelone, Roswell, Rosary, Ortega, Dort, Juvelon, Gordon, Pamela, and Nessiah.

A drama CD featuring stories about the Royal Army, Milanor's bandits, and part of the Imperial Army was released in March 2010.

See also the pages for Yggdra Union, the main title, and Blaze Union, the prequel following the Imperial Army.