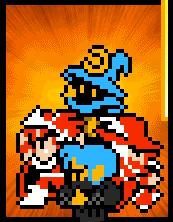 After nine years, two fake endings, well over a thousand strips, and (at least) two of the longest-ranged Call Backs in the history of the webcomic medium, 8-Bit Theater finally ended. A few months after the last proper comic's publication, Clevinger published a long epilogue to wrap things up

In 2021, as a 20th anniversary celebration, a crowdfunded annotated script

(because, as highlighted by the subtitle "Do Not Sue Edition", printing a comic based on video game sprites is just begging for the attention of "the brilliant and attractive lawyers at Square-Enix"... and also, the original pages are too low-resolution to be worth printing) was announced, to be released on both PDF and Door Stopper editions.

open/close all folders
A to M
N to Z
Suckers!