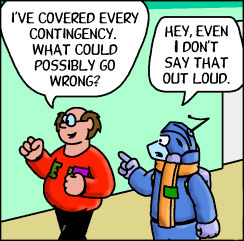 He didn't and it did.

Wanda: What could go wrong?
Darryl: Alphabetically or likely in order of occurrence!?
— Baby Blues
Advertisement:

When said sarcastically, it's telegraphing a disaster. When said more seriously, it's an open invitation for the world to go to hell in a handbasket.

Say there is one critical thing that could happen that would cause a catastrophe that, left unchecked, would directly or indirectly result in disaster. But everyone in the story is assured that this critical thing will never, ever happen. Ever. The audience knows better.

In the event that someone in the know tries to warn his superiors to get the situation fixed, expect them to be flat-out ignored or hints of actual impending face-melting doom dismissed as being Within Parameters and that It's Probably Nothing. Again, the audience will know better.

The Law of Conservation of Detail helps this along; the scientist isn't going to bother to mention the failsafe unless it's going to, well, you know. When is the last time you were watching a movie, and someone mentioned "if this object was damaged, there would be a catastrophe!" and the object was never mentioned again for the rest of the movie? Frequently combined with Einstein Sue, where one person in the work's universe sees the incoming problem (and is powerless to stop it).

It's often used to drive a plot. Everything is normal and then this happens and all hell breaks loose. Very often triggers the Disaster Dominoes.

A sub-trope of Million-to-One Chance. Often, but not always, combined with the Stock Phrase "What could possibly go wrong?". In these cases, it's often said seriously by characters performing a "simple" task where it does indeed appear that nothing can go wrong, but is said sarcastically by the audience. Other times it’s said sarcastically by the aforementioned Genre Savvy character in the story, when a very obvious danger is being foreshadowed.

Usually exaggerated in fiction for the Rule of Funny, but it is Truth in Television — asking "What could possibly go wrong?" unironically is a sign of overconfidence in a plan's success, which can easily result in not considering the situation thoroughly and making mistakes that could have been easily avoided if the planner had taken precautions for anything that could go wrong.

NB: The trope title is being said sarcastically. Before editing, see Other Stock Phrases for the Stock Phrase, which, as described above, is different from the trope. A use of this phrase in a non-ironic manner usually falls under Tempting Fate.

How Hard Can It Be?

When Rafael makes the point that if humans have invented ways to fly then how hard can it really be for Blu to fly. Cue a hang glider with two people taking off with the man on the bottom screaming ''Mommy!'' while his camera, money and wallet fall out causing Blu to get very nervous.

Alternative Title(s): How Hard Can It Be

How Hard Can It Be?

When Rafael makes the point that if humans have invented ways to fly then how hard can it really be for Blu to fly. Cue a hang glider with two people taking off with the man on the bottom screaming ''Mommy!'' while his camera, money and wallet fall out causing Blu to get very nervous.