Darth Wiki / What an Idiot! 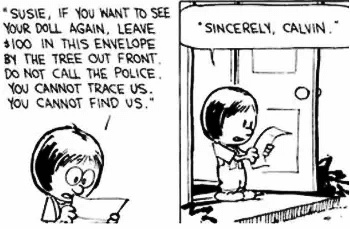 Protip: Never sign your name on a ransom note.
"Any first-day chemistry student could have told Ragby never to put sparks near a mystery gas. Unfortunately, Ragby had never met any first-day chemistry students, so it came as a complete surprise to him when the gas passed by Mulch Diggums ignited in a chain of miniature explosions."
— Artemis Fowl: The Atlantis Complex
Advertisement:

Because most viewers have basic common sense, one would usually expect the same from fictional characters. Any negative deviation from such usually prompts a Face Palm and the comment "What an idiot!" or similar, hence the entry name.

Can cause A Tragedy of Impulsiveness, if the situation becomes more serious. It is also the usual reaction to a character demonstrating especially severe Genre Blindness.

And please, as tempting as it is to defend your favorite work from forcing the Idiot Ball into its characters' hands, refrain from making Justifying Edits. With a Card-Carrying Villain or Idiot Hero, a few of these are to be expected. If the work as a whole has an Idiot Plot, it goes on that page instead. Also, do not assume that something listed here automatically makes it a bad work; it is usually more along the lines of "something else that is better could have been done". As explained on Idiot Ball, characters being idiotic can often serve as a weakness to them and sometimes make them more-or-less well-developed. And, of course, some characters are supposed to be idiots (or outright naïve at best), in which case we probably don't need a full and complete list of every stupid thing they do; a brief summing up would be more helpful. Characters making foolish decisions can also result in funny or dramatic moments, and therefore add to the enjoyability of a work; so writers can and have invoked this trope intentionally.

Advertisement:
Tropes commonly associated with "What an Idiot!"
Categories:

There are also other examples that do not fit the standard idiocy.

Alternative Title(s): What An Idiot