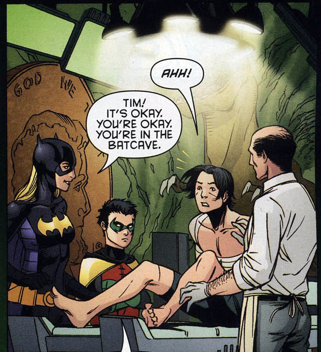 "Frodo woke and found himself lying in bed. At first he thought he had slept late, after a long unpleasant dream that still hovered on the edge of memory. Or perhaps he had been ill? But the ceiling looked strange; it was flat, and it had dark beams richly carved."
— The Lord of the Rings, "Many Meetings"
Advertisement:

Something bad happens. A character gets into a car accident, or they get attacked by an assailant, or some other situation that results in them been seriously injured, to the point of unconsciousness.

Cue transition. The character drowsily awakens sometime later, usually hours but sometimes days or even weeks. The character can now briefly serve as The Watson by learning how long it was, where they are, and what they missed. Often, the character will receive tragic or otherwise unwelcome news upon regaining consciousness, for the sake of drama. (This is sometimes Subverted as the "helpful" character turns out to be playing a joke on the recently awakened character.)

Subtropes include Abandoned Hospital Awakening, Undressing the Unconscious, Waking Up at the Morgue, You Wake Up on a Beach, and You Wake Up in a Room.

Because this trope usually marks a major turning point in the story... beware of SPOILERS!