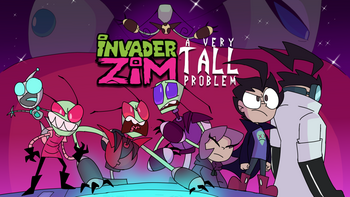 Time to show this planet what a REAL Tallest can do.note  Clockwise from bottom-left: Zim, GIR, Spork, Medea, Miyuki, Professor Membrane, Dib, Gaz, Purple, and Red.
Gaz: Okay, so the question of the day: What are you doing here?
Tallest Purple: We-we don't know! We were one minute about to be executed by the Resisties, but then we suddenly blacked out and woke up on the outskirts of your town.
Advertisement:

. It is a direct Fan Sequel to the 2001 animated series Invader Zim set in a separate continuity from the 2015 comic continuation and Enter the Florpus.

The series follows Almighty Tallest Red and Purple, the two rulers of the Irken Empire, who find themselves on the run from the Resisty after a shocking attack on the Irken Armada leaves them both stranded on planet Earth. Left with no other choice, the desperate duo must recruit the help of Zim and the Membrane family to save themselves and the Armada from its new ruler. But with the Resisty still strong and The Empire collapsing, will they get back to power in time to fix things? Or will they be destroyed by the corrupted empire they created?

The first half of the pilot episode, "A Very Small Problem", officially premiered on YouTube on February 4, 2022. It can be watched here

for free. An early access version launched on Patreon on February 2nd exclusively for top-tier patrons of AVTP. The first season is planned to consist of 20 episodes