Speak Ill of the Dead 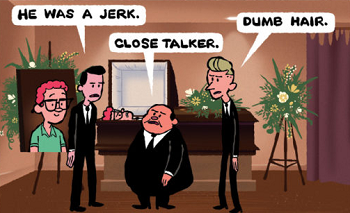 "They say if you don't have anything good to say about the dead, you should keep quiet. I say, he's dead, good."
— Harm, Milestone Comics
Advertisement:

Sometimes, not even death will curtail disrespect for one's enemies. In fact, it provides free rein to voice disapproval and disdain! This is usually a case of Last Disrespects, but sometimes it will be used to voice Brutal Honesty about issues surrounding the deceased. Sometimes the character will go the extra mile and mock those mourning the deceased to their face!

A somewhat memetic take on this is a response to its opposite trope of Never Speak Ill of the Dead: it boils down to "don't be an asshole while you're alive". This is naturally an Aesop of how one's deeds in life will affect their reputation past their death. If you like morbid humor, it could be a literal variant of Never Live It Down.

The opposite of Never Speak Ill of the Dead. When this is played for laughs, it's probably putting The "Fun" in "Funeral". Compare with And There Was Much Rejoicing, Bitter Wedding Speech, Pummeling the Corpse, and Asshole Victim.

This is a Death Trope, so expect unmarked spoilers ahead.