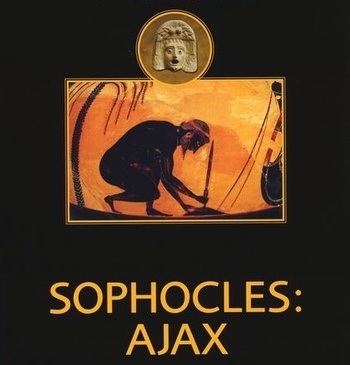 After rejecting the help of the gods, boasting about his self-made status, and starting off for a killing rampage after Athena's favourite hero, Ajax is struck with madness, temporarily under the belief that the sheep and cattle he is slaughtering are the Greek hordes. His emnity against his fellow soldiers stems from Achilles' armor being awarded to Odysseus, despite that Ajax is now the best living warrior and most alike to Achilles.

Odysseus shows up at Ajax's tent curious to know whether the rumours are true. Athena herself meets him, reveals what she has done, and gloats. Odysseus is put off by this. As Ajax's war bride and entourage fret about his many hours spent delusionally torturing sheep, Ajax finally regains his senses, and is utterly humiliated. Though they try to persuade him not to do anything drastic, and think of the children, after giving a nice sounding speech that is actually loaded with the implication he is going to commit suicide, he goes out to "bury Hektor's sword".

Meanwhile, Ajax's friends and family are having a party in relief, thinking he's come to reason, only to find out from a messenger that his brother Teucer has arrived and, by the way, prophecy says he really shouldn't leave the tent today. Everyone goes off in search of him, and eventually Tecmessa and Teucer find the body. Menelaus appears and orders them not to bury him in punishment for being a traitor, and leaves after a heated exchange. Agamemnon appears to reiterate this, but Odysseus intervenes on Ajax's behalf, not wanting to carry grudges beyond the grave or offend the gods further. Agamemnon lets him take responsibility and Teucer and Odysseus decide to become friends although Teucer will not let him help bury Ajax out of respect to the dead man's hatred of him.

One of seven surviving plays by Sophocles.