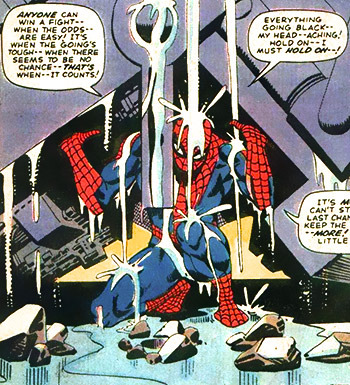 He isn't just holding that rubble up.
He eventually makes himself lift it.note To put that in full context, while Spider-Man does possess superhuman strength, the wreckage he was trapped under was so heavy that Spider-Man had to exert roughly TEN TIMES his general-maximum strength limit to actually do that. And he did.
"It's not in the circuitry, is it? It's not the machine that resists you; it's me, my spirit! And that's the part you can't break!"
— Cyborg to Brother Blood, Teen Titans
Advertisement:

The spirit of A True Hero is an awesome thing. Heroes can do anything if they are driven enough. They will not surrender, they will not stay down. Broken Bones, The Virus, Death, they are all to be shrugged off when the chips are down. No Despair Event Horizon for them.

If all this sounds implausible or excessively idealistic, remember that it's not just the good guys who can think like this.

Compare Humans Are Warriors, Heroic RRoD, Honor Before Reason, Do Not Go Gentle.

Not to be confused with the Servants, or literal Heroic Spirits.