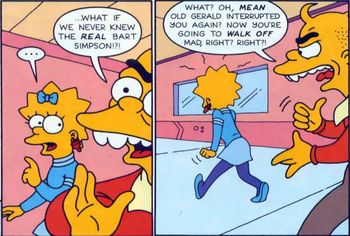 The character who, though able to speak, never does so on screen (except, perhaps, for that one really dramatic moment).

A variant of He Who Must Not Be Heard. The gag may be extended by having other characters refer to just how talkative this character is — but that's never seen on screen. ("Sorry I'm late, but (The Voiceless) caught me in the hall, and I couldn't get them to shut up.")

In movies, The Voiceless almost invariably says a line towards the end of the film — usually it's something complex and/or profound. Or they can go back to the previous joke and have them open their mouth, only to end the scene before any sound comes out.

Sometimes The Voiceless is The Team Pet, who is no doubt smarter than his masters, but can only communicate through normal animal noises and perhaps the occasional sardonic eye roll or other body language.

Contrast The Speechless, who never says anything because he actually cannot. Not to be confused with The Quiet One, which does speak, just not a lot. May utilize a Voice for the Voiceless or Mouth of Sauron. For the video game protagonist version, see Heroic Mime. When The Voiceless communicates entirely by body language, see The Silent Bob. If the character is a villain whose silence only makes them more frightening, they're a Silent Antagonist. See also The Singing Mute.

Before adding examples, please note that this trope implies that the character CAN, and DOES speak — we simply never see this on-screen (i. e. it is a narrative device rather than a character trait). If a character is physically incapable of speaking, it is The Speechless. If a character can speak but makes a choice to remain silent all the time, it is either The Quiet One or the Elective Mute.