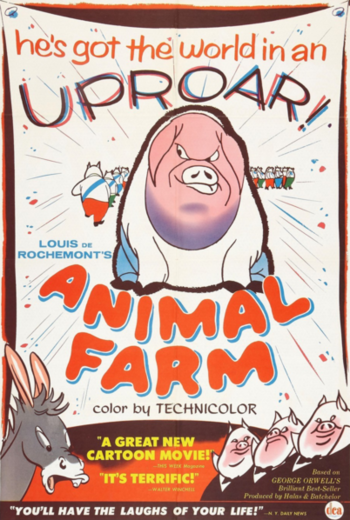 The first screen adaptation of Orwell's classic satire released in 1954 and the first full-length animated film made by Great Britain to get a theatrical release (the actual first feature was a navy training film for sailors) by Halas and Batchelor. The film has only two credited voice actors: Gordon Heath as the narrator and Maurice Denham, who voiced all the animals and humans!

The film's financing was done either in full or in part by the CIA — and no, the filmmakers themselves were not aware of this fact. In addition to providing the money they also influenced the production: making Snowball less sympathetic and of course changing the ending to something more upbeat to inspire anti-communist resistance.