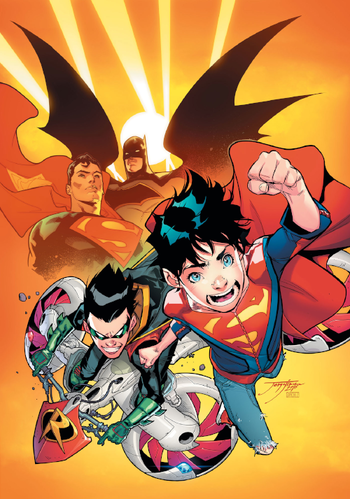 The Man of Steel, the Caped Crusader, and the characters kids really read the book for.
Sonic: It's Cream and Cheese!
Chris: Friends of yours?
Sonic: More like obligatory kid-appeal characters.
— Sonic F
Advertisement:

The Kid-Appeal Character is typically the character designed to appeal to a younger demographic. Cute, popular, tiny, likely to be Totally Radical, and almost always the youngest character on The Team, he's invariably obnoxious and thinks he's so totally cool, in a frantic effort to convince viewers that this is a family friendly show.

As well as that, the Kid-Appeal Character is all too often portrayed as seeing The Hero and/or The Leader of the Good Guys as his Father Figure. If the Leader is also quite young, chances are he'll see him as his Big Brother. In the same regard, he may look at The Lancer as being his uncle. If a color is associated with the character, then that color would be, if not yellow (if the character is female, she'll almost certainly be pink), then frequently brightly colored at any rate.

Depending on how young he is, how nice he is, or how old his father/brother figure is, the Kid-Appeal Character will usually take one of these roles:

The Kid-Appeal Character tends to stand out, especially in a story largely involving adult characters. Because of this any version can become The Scrappy, which is fitting since the original Scrappy was one of these. The ways this can happen is: The Clown is obnoxious as well as a Karma Houdini, the Weak But Lovable one never shows any real sign of helpfulness, the Ankle Biter slowly takes up prominence in the story over the primary characters, and as for the Teen Genius... have you ever heard the name "Wesley Crusher"? The wannabe can easily come across as a whiner, and become The Load. Slightly more common is for the character to acquire a Periphery Hatedom: loved by his intended fanbase, hated by everyone else.

However, that doesn't mean this type of character should never be used. In fact, they can be enjoyable when written well.

If the Kid-Appeal Character is a member of a Five-Man Band, they're probably The Chick or The Heart as the moral center of the team, always considering the little guys. It's also possible that they're The Smart Guy instead, more adapted to modern technology than their older teammates. They won't often be The Leader, The Lancer, or The Big Guy, though, as they rarely have enough strength for any of those roles (strength of personality for the first two and physical strength for the third). A smart leader is often fully aware that the Kid-Appeal Character is not a strong front-line warrior and will assign them roles better suited towards their skills, such as being a scout (like Optimus Prime did with the former Trope Namer, Bumblebee). On the other hand, they may be explicitly not part of the team, being a Tagalong Kid (or in nonhuman cases, a Team Pet) at best. This doesn't preclude showrunners from trying to appeal to kids by giving the character their own subplots, taking care of something the main heroes are otherwise too distracted with.

If the Kid-Appeal Character is killed off at the beginning or the middle of the series, this guarantees to lead to a much more serious route.