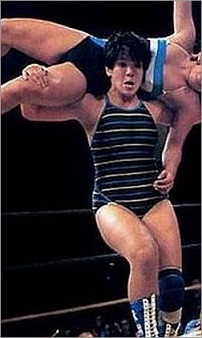 Tomoko Kitamura (born July 28, 1963) is a retired Japanese Professional Wrestler best known for her work in All Japan Women's Pro-Wrestling as Lioness Asuka. She debuted in 1980 and made an immediate impact, winning the AJW Junior Title

within her first year. She would hold the AJW Singles Title

twice. In 1983, she and Chigusa Nagayo formed the Tag Team the Crush Gals, who would be hugely successful, both in terms of titles won and in terms of television ratings. They were 3x AJW WWWA Tag Team Champions

, and, long after their initial breakup, they won the GAEA AAAW Tag Team Titles

. Asuka also competed for Aja Kong's ARSION, NEO, Jd' and various other promotions. She made her PPV debut in the women's match at Survivor Series 95, where she was on Team Bertha Faye, and was the first one eliminated, courtesy of Alundra Blayze. She was inducted into the AJW Hall of Fame in 1998 and into the Wrestling Observer Newsletter Hall of Fame in 1999.

Not to be confused with WWE's Asuka - Kanako Urai picked Asuka as a ring name as a tribute to Lioness.