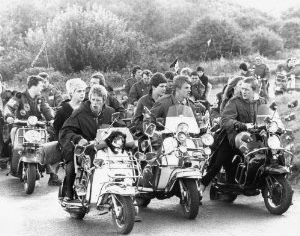 The mods of Quadrophenia show off their wheels.
"Zoot suit, white jacket with side vents five inches long.
I'm out on the street again
And I'm leaping along.
I'm dressed right for a beach fight,
But I just can't explain
Why that uncertain feeling is still here in my brain"
— The Who, "Cut My Hair"
Advertisement:

A sort of precursor to the 2010s-era Hipster, only with far more amphetamines and street fights, the Mod subculture emerged in England in the early 1960snote the name referred to fans of "modern" jazz as opposed to the Dixieland-listening "trad" fandom. Characteristics included wearing tailor-made suits and army jackets, sporting glasses with thick square frames, listening to "beat" music, soul, ska, and R&B as well as bands such as The Beatles, The Rolling Stones, The Who, The Kinks and The Small Faces, riding Italian scooters customized with extra chrome mirrors, all-night dancing, and fighting with The Rival Rocker subculture, who preferred the leather-jacketed "Greaser" look and listened to American rock and roll music like Chuck Berry and Elvis Presley. This rivalry came to a head at the Brighton Beach Riots of 1964, as shown in the film Quadrophenia. The mods and rockers fights led to a moral panic and columnists clutched their pearls in terror. The subculture died out in the late 1960s (although it's more working-class and aggressive strand mutated into Skinheads while the more stylish and less agressive elements evolved into the counterculture), experienced a revival in the late 1970s and early 1980s, and subsequently influenced the Britpop explosion in the 1990s and the Indie Rock and Pop Revival movements in the early-mid 2010s.

Has nothing to do with forum moderators or game modifications.