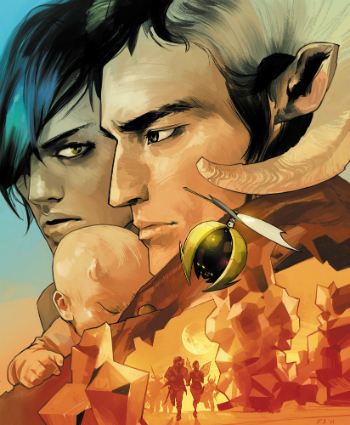 "This is an original fantasy book with no superheroes, two non-white leads and an opening chapter featuring graphic robot sex. I thought we might be cancelled by our third issue."
— Brian K. Vaughan

Far off in space, the large planet of Landfall is populated by people sporting (slightly functional) wings of various kinds. The moon of Landfall is called Wreath and is populated by people with various kinds of animal horns. The two races have been waging war for so long that the fight between the 'wings and horns' is just a fact of life. The wings have advanced technology while the horns wield magic — making the whole thing just a little more complicated and brutal.

The actual plot starts when a POW Wreath soldier named Marko gets into a relationship with his guard, Alana. They then escape, breaking out of jail and deserting, respectively, and get married. While hiding out on another planet called Cleave, Alana gives birth to a halfbreed child possessing both wings and horns, whom they name Hazel. As the new parents rush to escape Cleave alive both factions become aware of the union and seek to kill the parents and possess their child.