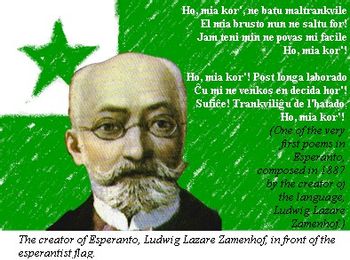 is a Conlang made by L. L. Zamenhof in 1887 designed to be an easy-to-learn language that would help with communication between countries of different languages and maybe even create world peace. The vast majority of the vocabulary is based on European roots, about 2/3 being Latinate derivations from French and about 1/3 being Germanic derivations from English and German, with only a handful of derivations from other sources; whether this makes it appreciably more difficult for non-Europeans to learn is a topic of much discussion among fluent Esperantists, many of whom have non-European mother tongues. Sadly, it has yet to achieve the full extent of Zamenhof's ambitions, thus spawning occasional mockery in modern medianote and murderous rage on the part of those who oppose movements that attempt to bridge social gaps; the Nazis outlawed Esperanto and even sent some of its speakers to the camps.. Even then, it's still a thriving language within its own media, and there are a few people around the world who have grown up with Esperanto as a first language.note in addition to a natural language, obviously Some stories set in The Future use Esperanto as if it had become the main language. It's also occasionally used As Long as It Sounds Foreign.

Esperanto has the advantage of being more regular than naturally-evolved languages. It has only 16 grammatical rules

at base (though it also has other folds and wrinkles

at higher levels), and it never deviates from those rules; also, each letter is pronounced one way and one way only, each word is spelled exactly as it's pronounced, and there are no silent letters. By contrast, English (like all natural languages) is full of irregularity, such as all kinds of weird, inconsistent spelling and grammar rules that make it much harder to learn than it should be. In addition, Esperanto words are much more easily creatable, using prefixes and suffixes around the root word to handily morph words in any way necessary, thus making sentences more concise and language more literal. (Opinions vary on the subject of how colorful language equivalents have solidly found their way into the language, morphable like any other word.) Written Esperanto presents a bit of a problem in the digital age, since 6 letters of the Esperanto alphabet — ĉ, ĝ, ĥ, ĵ, ŝ, and ŭ — don't appear in the standard ASCII/ANSI character set; many authors choose to simply write the letter without the hat on it and put an x afterward, like so: cx, gx, hx, jx, sx, ux.note Eventually, even Zamenhof decided that these funny-looking letters were a bad idea, and unsuccessfully tried to get rid of them.

However, with the widespread adoption of Unicode in digital environments today, this difficulty is much reduced; Esperanto diacritics are included in that character set.

Some informative sites about Esperanto (in English) are at Wikipedia

Despite its status as the best known artificial language, not everybody agrees with all parts of it, (as you can read here

) and thus it has spawned other languages that have tried to correct perceived flaws. These projects are collectively known as Esperantidoj

. For one reason or other, these languages have not been as successful as Esperanto.

A few TV Tropes pages are available in Esperanto translations, including this very page. To see the index, go here.

For those who want to learn it, there is a free E-mail course

(U.S. only, free except for postage costs), Lernu.net

Incidentally, "Esperanto" is of course itself an Esperanto word (or name, to be precise; it comes from Zamenhof's pen name, Doktoro Esperanto, and translates literally, ‘one who hopes’), hence is pronounced "ess-pear-AHN-toe", not "ess-per-rant-o".