Literature / Lord of the World 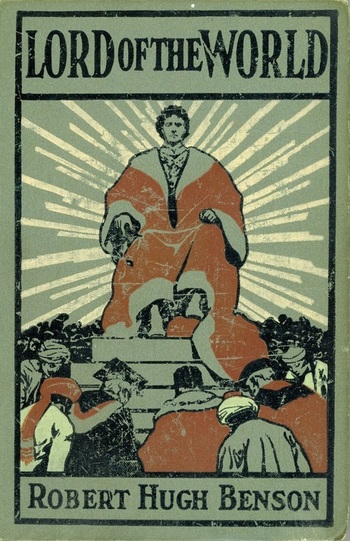 "Then in the heavenly light, to the crash of drums, above the screaming of the women and the battering of feet, in one thunder-peal of worship ten thousand voices hailed Him Lord and God."
Advertisement:

Lord of the World is a 1906 dystopian Catholic novel by Monsignor Robert Hugh Benson, a British Catholic priest and convert from Anglicanism. Something like a Catholic Left Behind, it follows two stories. The first is of Father Percy Franklin, a British Catholic priest working in a world that has by-and-large forsaken the Catholic faith in favor of Marxist one-party states. The second follows Oliver and Mabel Brand, a non-religious British couple. Oliver is MP for Croydon, and generally a reliable supporter of said Marxist state. At the start of the novel, the European powers are inches from the possibility of war with the Eastern Empire. A peace delegation from the United States, featuring as a last-minute addition the young Senator Julian Felsenburgh, may be their only hope. But as Felsenburgh begins his meteoric rise in power, the Church senses danger...

Then this page passed, and the glory of it.