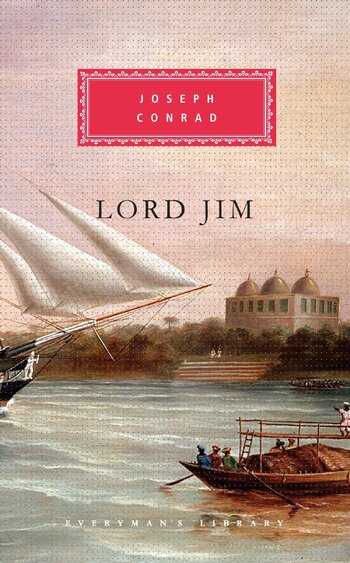 "It is when we try to grapple with another man’s intimate need that we perceive how incomprehensible, wavering and misty are the beings that share with us the sight of the stars and the warmth of the sun. It is as if loneliness were a hard and absolute condition of existence; the envelope of flesh and blood on which our eyes are fixed melts before the outstretched hand, and there remains only the capricious, unconsolable and elusive spirit that no eye can follow, no hand can grasp."
Advertisement:

Lord Jim is a 1900 novel written by Joseph Conrad. It is the story of an idealistic Englishman who believes that his cowardice while serving as an officer on the pilgrim ship Patna has ruined his life. He later finds his way to an obscure island outpost of Patusan, where he is able to rebuild his life and reclaim some honor. However, the ghosts of Jim's past come back to haunt him when the greedy adventurer Gentleman Brown arrives, and plots to steal from Jim's profitable little paradise...

The 1965 film provides examples of: