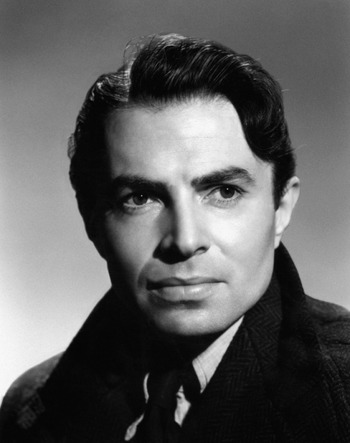 "How do I wish to be remembered, if at all? I think perhaps just as a fairly desirable sort of character actor."
Advertisement:

James Neville Mason (15 May 1909 – 27 July 1984) was an English actor notable for a long and distinct career as leading man and character actor whose distinct looks, smooth voice and intense presence made him flexible to play roles ranging from hero to villain, as well as characters who are in between. He specialized in playing the Byronic Hero who is handsome, demanding, passionate and self-destructive.

Mason was one of the few British stars of his generation without a long career in the stage or any formal training as an actor. Indeed, he found greater fame, renown and success as an actor on film than he ever did on stage. He initially began his career making quota quickies in The '30s, steadily building a reputation as a dependable, and highly intelligent, actor who directors and technicians liked. Then in The '40s he appeared in more notable films until achieving his Breakthrough Hit with The Seventh Veil. The success of that film brought him to Hollywood and Mason would regularly make films in England, America as well as many other European productions. He was especially famous for his role as Captain Nemo in Disney's adaptation of Jules Verne's classic, as well as the self-destructive Norman Maine in George Cukor's 1954 version of A Star Is Born opposite Judy Garland. Other notable roles include Odd Man Out, Lolita (as Humbert Humbertnote The joke is that Humbert in the book says he would have cast Mason to play him) and as the villain Vandamm in North By Northwest.

In his long career, he appeared in several notable films, remaining prolific until his death in 1984 with his final appearances released posthumously. He was nominated three times for an Academy Award but never won the award but he is considered one of the greatest actors of his generation. He was especially known for his voice and often worked as a voiceover actor for many documentaries, including documentaries on films (Mason was a cinephile) on Buster Keaton. In fact, Mason helped preserve much of the Keaton filmography, when he found a cache of Keaton reels in a house he'd bought that once belonged to Keaton.

James Mason works with pages on TV Tropes include: