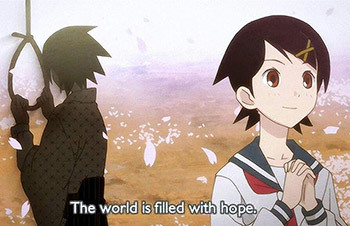 ...And people trying to make themselves taller.
"The world breaks everyone and afterward many are strong in the broken places. But those that will not break it kills. It kills the very good, and the very gentle, and the very brave, impartially."
— Ernest Hemingway, A Farewell to Arms
Advertisement:

A character far too idealistic for their own good.

It may be the Naïve Newcomer who Jumped at the Call — he or she has a huge stack of comic books/movies/bards' tales, and thinks they're pretty Genre Savvy. Unfortunately, their universe is more toward the cynical end of the Sliding Scale of Idealism Versus Cynicism than the stories they know. Alternatively, they might just be generally nice people whose idealistic attempts at solving the problems of their world turn out to go horribly horribly awry as no one else plays by their rules. Usually used as nothing more than a device to highlight the realism/grittiness/cynicism of the setting.

This character either becomes a victim of a Trauma Conga Line or a bad Break the Cutie ordeal, dies horribly or acquires a coat of jade post-haste. In settings that are still somewhat idealistic, they might get off with just becoming a Knight in Sour Armor or the Morality Pet to one. In particularly anvilicious cases, expect deployment of Diabolus ex Machina to deal with them.

If the character remains triumphant and idealistic throughout, then it may be a case of Good Is Not Dumb, The Pollyanna, or even Stupid Good. If their idealism drives them to turn evil or ruthless, they become a Well-Intentioned Extremist.

While All Loving Heroes are frequent victims of wide-eyed idealism, their suffering or sacrifice can encourage them to become full-blown Messianic Archetypes and inspire others in the setting to lighten up and thereby change the setting, unless they're a different kind of messiah, in which case the setting is only cemented.

When The Hero appeals to a group of people, often Least Is First falls under this. Someone will likely tell them Silly Rabbit, Idealism Is for Kids! and they are just as likely to retort with Silly Rabbit, Cynicism Is for Losers!.

Compare The Idealist, Being Good Sucks, The Pollyanna, the Naïve Everygirl, the Love Freak, and The Ingenue. If there are entire civilizations of Wide-Eyed Idealists waiting to be slaughtered, see also We Have Become Complacent and Sugar Apocalypse. Contrast the Grumpy Bear, the cynic in an idealistic setting. See Turn the Other Cheek and The Farmer and the Viper. Not to be confused with using literal wide eyes to show that a character is idealistic.