Theatre / The Book of Mormon 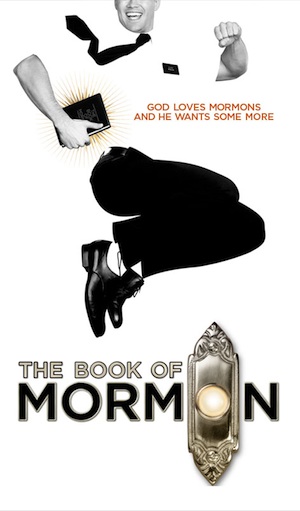 "This book will change your life!"
"Hello! My name is Elder Price!
And I would like to share with you the most amazing book..."
Advertisement:

The Book of Mormon is a Broadway musical by Trey Parker and Matt Stone and Robert Lopez.

The story follows two young Mormon men who are assigned to Uganda for their mission. Elder Kevin Price is a fresh-faced, eager young man and the most devout, holy member of his Mormon church. Elder Price's partner, Elder Arnold Cunningham, is a nerdy goofball who hasn't read all the scriptures, is prone to lying, and generally very awkward. The two are sent to Uganda as part of their mission to convert people to the Mormon faith, but quickly end up way over their heads once they see how bad things are in Uganda.

The musical pokes fun at organized religion and takes some admitted liberties with Mormon doctrines, such as the story of Joseph Smith and the magical AIDS frog. In the end, the characters realize that their faith has inspired them to be better people and to help others. Even if they convey the Book of Mormon's stories in a wildly inaccurate way — including involving Mordor and Boba Fett — their honesty and optimism ends up convincing their Ugandan students to convert to Mormonism and try to make the world a better place.

Created by the same people who made South Park, so you shouldn't be surprised to find a lot of Black Comedy. Nor should you be surprised that the message of the play is basically the same as in the South Park episode "All About Mormons": The Book of Mormon itself might be completely bogus, but the important thing is that the Mormon teachings inspires people to better themselves.

The cast album was released and became the best-selling cast album of all time on iTunes, beating out American Idiot and reaching #2. The full soundtrack can be streamed for free on the official Facebook page

The show won a huge number of Tony Awards, including Best Musical.

Not to be confused with the actual religious text The Book of Mormon.

"♫ I still have maggots in my scroooootuuuuuum! ♫"