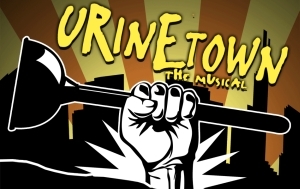 Urinetown is an American musical dark comedy by Mark Holloman and Greg Kotis, about a dystopian future in which there has been a catastrophic drought, and the Urine Good Company and its CEO Caldwell B. Cladwell have gotten laws passed outlawing private restrooms and requiring payment for the usage of public ones, so as to conserve water. Those who do not pay for "The Privilege to Pee" are sent to a mysteriously ominous place known only as Urinetown. For twenty years the poor have been oppressed by ridiculous prices, until one day a young Public Amenity attendant named Bobby Strong leads an uprising of the Poor against the tyranny of their oppressors.

The original Broadway production was directed by John Rando and featured John Cullum as Cladwell and Hunter Foster as Bobby. It opened at Henry Miller's Theatre on September 10, 2001 and closed January 18, 2004, garnering rave reviews during its tenure, as well as ten Tony nominations.