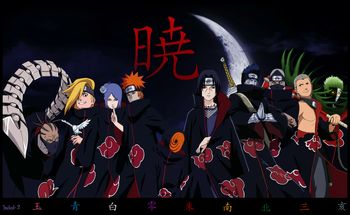 Pictured: The Nebulous Evil Organisation set out to Take Over the World. All ten of them.
"We're the Robot Mafia… The entire Robot Mafia."
— The Donbot, "surrounded" by his two goons, Futurama

Occasionally, the hero(es) might meet a group of characters who make up a secret organization that either menace or help them. They are shadowy, and mysterious, known for their unique and quirky members, and the organization has a reputation for being far reaching and prevalent… except we never see any of that — it's just talk. Whenever these guys show up, it's just the same group of misfits we know and love.

In the rare occasion that there are more of their number in existence, those characters never last. They simply show up and then disappear, with a few cameo appearances in the future, but still not enough for it to break our Fridge Logic.

A result of having an Economy Cast. See Quirky Miniboss Squad and Suspiciously Small Army for a Sub-Trope of this in Video Games. If one person purportedly has multiple roles in the organization, there may be New Jobs As The Plot Demands. Can be justified if the few members there are is each a One-Man Army.

See also The Main Characters Do Everything, which is related if there are no extras in the background, and Critical Staffing Shortage. May be a result of the characters being Always on Duty. Also compare Club Stub. Two-Teacher School is a special case for school-based stories where the adult staff is severely limited to keep the focus on the students.

Alternative Title(s): A Half Dozen Guys In A Basement, Oddly Small Organisation