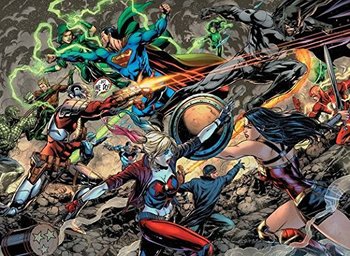 That's a group of expendable Boxed Crooks going up against the heaviest hitters in The DCU. And it ain't a Curb-Stomp Battle!
Eastwood: You're saying it's our team's uniqueness that makes us so effective.
Simmons: No, I'm saying you have a seemingly endless reserve of sheer dumb luck, and I want to capitalise on it.
— Exterminatus Now, "Despite Appearances"

A close relative of Reassignment Backfire, except this turns out rather well for the superiors. This is when your Ragtag Bunch of Misfits are a bunch of assholes or at least out of favour with high command, and their superiors are clearly deliberate in sending them off to their certain demises. The problem is that, through sheer luck, ruthlessness, or actual competence and skill, they keep returning, sometimes even accomplishing the impossible missions.

However, rather than get worried for their jobs, the superiors are actually quite pleased. Now they've got Cannon Fodder who are actually likely to get the job done, but whom no one is going to miss if they don't come back! Often the mark of very cunning superiors.

Sub-Trope of We Do the Impossible. Contrast Elite Mooks, who are actually intended to be elite, as well as One Riot, One Ranger and Elites Are More Glamorous, where the superiors send out someone who is meant to be elite from the start.