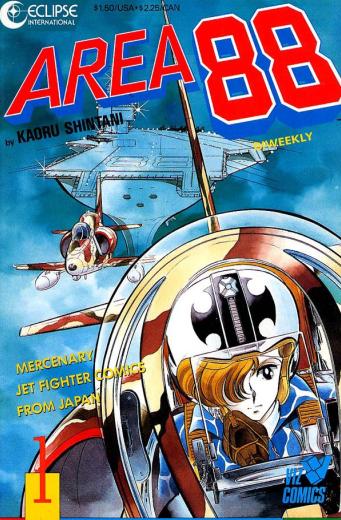 "It's not just a job, it's an indenture."
—Tagline for a showing of Area 88 at the MIT Anime club.
Advertisement:

Area 88 is a manga by Kaoru Shintani that ran from 1979-1986. It is the story of Shin Kazama, a brilliant Japanese pilot tricked into enlisting in the Foreign Legion mercenary air force of the ambiguously Middle Eastern or North African kingdom of Aslan, sometime in the late 70s or early 80s. Aslan is in the middle of a bloody civil war between two brothers contending for the throne, and Shin and the other pilots at the titular airbase are at the front lines of the war, fighting to defend the existing government from the rebellion.

The story starts with the arrival of a Japanese photojournalist (Goh "Rocky" Mutsugi in the manga and OVA; Makoto Shinjo in the TV series) at the isolated base. He has been pursuing rumours of a Japanese mercenary pilot and finds him along with some great photographs. Shin's story is told as he remembers how he came to be trapped in this hell on earth.

Shin and his childhood best friend, Satoru Kanzaki, were trainee pilots for Yamato Airlines, and both of them seemed to be headed for the top. Shin had even caught the eye of the beautiful daughter of the CEO, Ryoko Tsugumo. But one day, while celebrating the end of a training trip to France, a jealous Kanzaki tricks a drunken Shin into signing a contract to join Aslan's military. He is picked up by 'recruiters' the next morning. Now he's forced to risk his life every day in a war that means nothing to him, and he has only three ways out:

Along the way, he must deal with the blood on his hands and the horrors of war.

Among Shin's comrades at the base are: Mickey Simon, an American Vietnam War veteran who flies an F-14 (until it was shot down in the manga); Greg Gates, a masochistic Dane; and Saki Vashtal, the base commander, and a member of Aslan's royal family. These are the longest lived of the pilots still at the base.

Back in Japan, Kanzaki begins courting Ryoko in Shin's place. He also rises through the ranks of Yamato Airlines, eventually managing to acquire control from Ryoko's father through an underhanded business deal and stock purchased by proxies. Ryoko, by chance, sees a photo of Shin in a magazine and embarks on a quest to find him. Kanzaki becomes determined to either stop Ryoko or ensure Shin's death.

Area 88 was one of the earliest manga to be released Stateside. Eclipse Comics and VIZ Media published the series as single chapters each about the size of standard comic book, but stopped after 42 chapters (perhaps a quarter of the whole series), though it continued (but was not completed) in the Animerica magazine. A fan translation of the final twelve issues is available here

Shintani started his career as an assistant to Leiji Matsumoto, and the influence clearly shows in his character designs and more humourous panels.

There was also a 12-episode TV series remake released in 2004. ADV also released this version. Since then, ADV disbanded into a group of different companies, none of which retained the license, meaning both the OVA and the TV series are currently unlicensed in the English-speaking world.

There were also videogames based on it. Not to be confused with the 2014 manga Area 51.