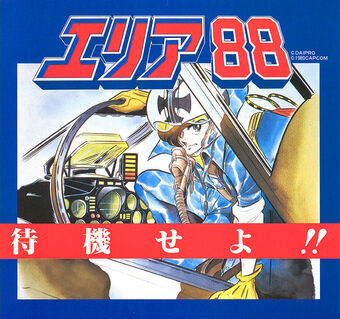 Area 88, also known as U.N. Squadron. in the US, is a arcade Shoot 'em Up (Horizontal Scrolling Shooter) was made by Capcom and later ported to the SNES.

It was based on the eponymous manga series and it features Shin, Mickey, and Greg of the as playable pilots, and McCoy and Saki as support characters.

The games share very little with the series (although it did use bounties as a way for the player to buy Power Ups between levels). The arcade version featured three different types of planes assigned for each character: Shin flew the F-20, Mickey the F-14, and Greg the A-10. The SNES version differentiated characters by how quickly they leveled up the main weapon and how quickly they recovered from damage; all characters started with the same plane (the F-8E Crusader, Shin's starting plane in the series). It also eschewed the arcade's linear stage progression with an expanding mission map, the ability to buy other planes (including the Tomcat and Thunderbolt), and moving stages such as supply convoy raids and bomber interceptions. It got an Spiritual Successor in the shape of Carrier Airwing, when Capcom lost the rights of the manga along the way.