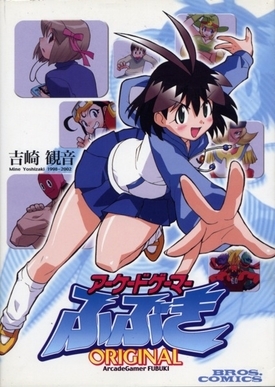 Arcade Gamer Fubuki is a manga series created by Mine Yoshizaki (who went on to create Sgt. Frog and Kemono Friends), which was serialized from 1998 to 2002. It was later adapted into a four-episode OVA series, which was released from 2002 to 2003 and eventually saw a U.S. DVD release in 2005. It's a sort of fan-sequel to an older manga and anime called Game Center Arashi, which had a similar premise but focused on a bucktoothed boy — who makes a cameo appearance in the series.

The story revolves around a young girl named Fubuki who is entered in the Best Of Arcade Gamer video game tournament. She seems incompetent; but she has a secret weapon in the form of the Passion Panties, a magical pair of panties that give her the ability to play video games really well while upside down and shooting electricity out of her hands. But there's an evil organization of muscle men dressed as Galaxians, led by a woman dressed as a Galaxian flagship; they come from some kind of parallel dimension and are commanded by a mysterious but familiar voice. Fubuki also has to deal with other competitors, including her rival, who wields a pair of black Passion Panties and doesn't suck at video games without them!