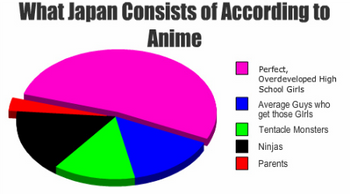 "Far, far away, across the sea, there is a fabled land that people speak of as a place of enchantment and wonder, of magical beings of myriad shapes and sizes. A place where one can make their wildest dreams come true.
And by that, we in America are of course referring to Japan. But Gensokyo is kinda like that."
— Chronicles of Shattered Border

The country of Japan, but portrayed as a world that works like what exported Japanese media have taught us.

In Western works, it might serve as a parody of the anime fandom in general, or Western perceptions of Japan. In Japanese works, it might be a jab at Occidental Otaku who seem to actually believe in this, or lampshaded to emphasize that this particular work is more realistic than that. In some cases, it's used as little more than a Japan-flavored Fantasy Kitchen Sink, no commentary required.

The most common examples are:

Due to the Lowest Common Denominator, it might also include other Japanese pop cultural references that are not really anime-specific, such as Ninjas, Kaiju, the Yakuza, or the Zaibatsu (particularly in early Cyberpunk literature).

This is a part of the Hollywood Atlas, like Eagleland, Eskimo Land, Yodel Land and the Land of Dragons. Thirty Seconds Over Tokyo is similar, but unfiltered (or at least less so) through the lens of anime.

Not be confused with the French magazine Animeland