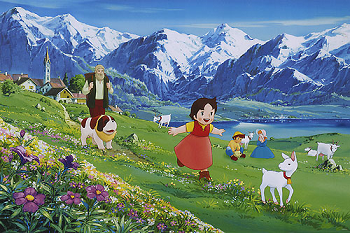 The Hollywood Atlas version of Switzerland, as well as Bavaria, Austria, Northern Italy, and other regions in or near the Alps — in fact, any place in Germany is also frequently part of Yodel Land in the Hollywood Atlas.

May overlap with Oktoberfest, given the German influence in the region (Switzerland officially was part of the Holy Roman Empire until the Thirty Years War, Austria belonged to Germany before 1866 and from 1938 to 1945), or with Norse by Norsewest due to confusing Switzerland with Sweden. The Spanish-speaking people make the latter confusion because in the language both countries names ("Suiza" and "Suecia" respectively) are way more similar. Same goes for Russians ("Shveytsariya" and "Shvetsiya").

, the Angels do this, but they are singing in German gibberish and Natalie is wearing lederhosen.
Literature
Live-Action TV
Music
Tabletop Games
Theater
Theme Parks
Video Games
Western Animation