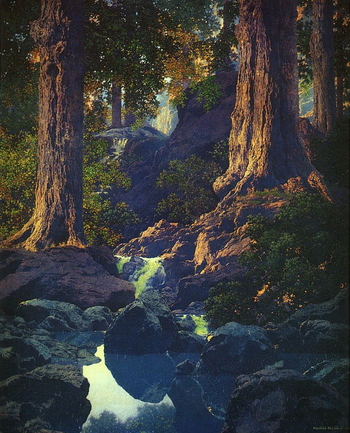 The Glen, by Maxfield Parrish
"They say he is already in the forest of Arden, and a many merry men with him; and there they live like the old Robin Hood of England: they say many young gentlemen flock to him every day, and fleet the time carelessly, as they did in the golden world."
—Charles, As You Like It
Advertisement:

Often paired with Adventure Towns, this area consists of the entire relatively pristine wilderness outside of The City. Urban sprawl is not much of an issue, especially if you just start building your cities up (or underground). An hour's drive from your house can take you to a place that's virtually a national park.

It's a hiker's dream and a Nature Hero's home. This might be a result of historically good city planning, although a story taking place After the End might imply a disaster hit the place and it's just regrown after humans vacated. If humans do live there, but it is still idyllic, it is Arcadia — which, indeed, often lies by the Ghibli Hills.

Of course, despite its soothing grass, great blue skies and small animals, Ghibli Hills is still a lawless wilderness, crawling with dangerous monsters, highwaymen, wild magic and adventure. It is a popular home for people who need to live beyond the reach of unjust officials, bought judges, and corrupt law enforcers in the city. In older works, written in times when most people lived in the countryside and so were less moved by the greenery, this freedom from injustice was its main allure, where it may chiefly contrast with the Decadent Court.

In video games it often overlaps with Green Hill Zone as the first step on a hero's journey, and as such is bound to contrast with its various final destinations. See also The Lost Woods, although those are visibly more dangerous and thus usually traversed later on.

In most anime, especially with ones trying to deliver a message, this speaks to the nostalgia of many older directors for the traditional Japanese countryside that largely no longer exists because of urbanization. One historical western equivalent is Merry England for historical settings. Other times the pristineness is explained by alternate history, particularly the avoidance of major conflict or wars which lets people concentrate on improving themselves.

Named for the lush, friendly settings of Studio Ghibli films. Which largely stems from the fact that Mitaka and Musashino, Tokyo's affluent residential suburbs where the studio itself is headquartered, note To the point that Hayao Miyazaki is Fan Nicknamed as The Lord of Mitaka. generally have exactly that kind of scenery.

This trope's Shadowland would be Mordor or a Polluted Wasteland... or perhaps a City Planet.

It is, indeed, a fearful place. The torrent, swollen by the melting snow, plunges into a tremendous abyss, from which the spray rolls up like the smoke from a burning house. The shaft into which the river hurls itself is an immense chasm, lined by glistening coal-black rock, and narrowing into a creaming, boiling pit of incalculable depth, which brims over and shoots the stream onward over its jagged lip. The long sweep of green water roaring forever down, and the thick flickering curtain of spray hissing forever upward, turn a man giddy with their constant whirl and clamor. We stood near the edge peering down at the gleam of the breaking water far below us against the black rocks, and listening to the half-human shout which came booming up with the spray out of the abyss.