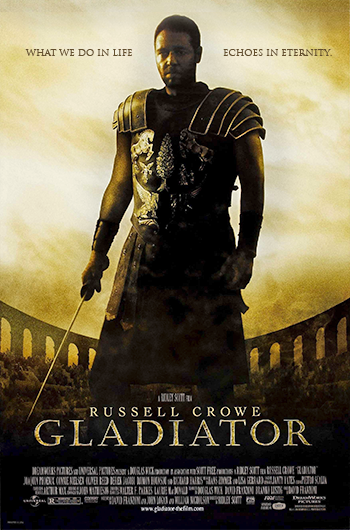 "ARE YOU NOT ENTERTAINED!?"
"My name is Maximus Decimus Meridius, commander of the armies of the north, general of the Felix Legions. Loyal servant to the true Emperor, Marcus Aurelius. Father to a murdered son, husband to a murdered wife. And I will have my vengeance, in this life or the next."'
Advertisement:

Gladiator is a 2000 epic historical drama film directed by Ridley Scott. It follows the same period of history and takes similar liberties with its plot as the 1964 film The Fall of the Roman Empire, while also taking several cues from Stanley Kubrick's Spartacus. It is credited with reviving the epic Sword and Sandal genre, which had largely disappeared from the big screen since the aforementioned Fall of the Roman Empire back in The '60s.

In AD 180 at the time of the Roman Empire, General Maximus Decimus Meridius (Russell Crowe) is named heir to the ailing Emperor Marcus Aurelius (Richard Harris), who wishes that Rome be restored to a republic with the Senate ruling as the representative of the people. The Emperor's mad son, Commodus (Joaquin Phoenix), sees things differently: he murders his father, declares himself to be the new Emperor, and orders that Maximus be killed when the general refuses to pledge loyalty to him. Maximus escapes his fate, but unfortunately for him, his wife and young son do not. Maximus swears to avenge their deaths and join them soon after; wandering around the countryside, he is soon found and brought into slavery.

Maximus is then trained as a gladiator by his captors, and he successfully wins the crowds to him in his first few performances; this allows Maximus to be brought to Rome and compete in gladiatorial battles arranged by Commodus. Maximus' fame soon wins Rome's heart — to the point where he begins to become more popular among the people than Commodus — and begins to plan his revenge...

A sequel is in development according to Ridley Scott.

This film is not to be confused with the proto-superheroic 1930 book Gladiator, the TV gameshow Gladiators, the Taito arcade game, the Taiwanese arcade game or the 1992 boxing drama of the same name.

"On my signal, unleash tropes:"

During the film's climactic duel, Emperor Commodus is disarmed by Maximus and he orders his legatus Quintus to give him his sword. Not only does he refuse, but the rest of the guards follow Quintus' order to sheathe their swords rather than give their sword to the Emperor.

During the film's climactic duel, Emperor Commodus is disarmed by Maximus and he orders his legatus Quintus to give him his sword. Not only does he refuse, but the rest of the guards follow Quintus' order to sheathe their swords rather than give their sword to the Emperor.