You Can Barely Stand 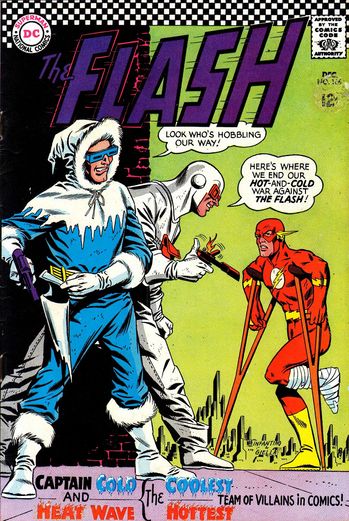 "It's conceivable, you miserable, vomitous mass, that I'm only lying here because I lack the strength to stand. But, then again... perhaps I have the strength after all."
— Westley, The Princess Bride
Advertisement:

As a rule, much of fiction ends with the villain being defeated by the hero. This should be dramatic, but if the true villain isn't that physically powerful, then this is going to be a rather short fight.

Sure, a writer could give their master manipulator a Humongous Mecha or have your amoral industrialist secretly be a martial arts master, but there's also something satisfying in bringing the invincible hero down a few pegs. Many pegs. To the point where they're already a few moments from death when they meet; this has the effect of showing that the character isn't fearless simply due to having superior power, but superior character-strength even when stripped of those abilities.

You Can Barely Stand is a scene where the villain meets the hero when he's in no fit state to fight. The threat of blood loss or collapse is as much a threat as the bad guy slapping him about and telling him he's failed and that he's not that invincible after all. The reason for the injuries can include a special weakness, having been poisoned, having been tortured, magical influence, or having just gotten the crap kicked out of him by either the Mooks or The Dragon.

Either way, the hero will eventually get a dramatic burst and fight on despite his weakened state, and will usually defeat their foe by the slightest of margins. Only once they've won will they be allowed the luxury of collapsing. For a truly Bittersweet Ending, they might never get up again.

On the flip-side, The Hero may be fighting a lackey who's just too stubborn to quit. In pity, the hero tells the lackey that they should surrender, or just leaves the fight themselves. This often happens in the leadup to a Heel–Face Turn.

A common form of Drama-Preserving Handicap. A villainous version of Tempting Fate. If the hero is at their physical best when meeting the villain face-to-face, expect the hero to suffer a Game-Breaking Injury. May manifest as Injured Player Character Stage. One hero might say this to another one who insisting that they can still fight.