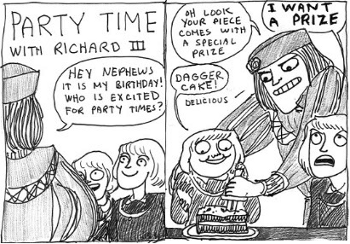 "How come the kindest parents always have the most dickass relatives?"
— The Nostalgia Critic, reviewing James and the Giant Peach
Advertisement:

Everyone has an uncle who they're not allowed to go camping with. For some reason, the brother and occasionally sister of the hero's father or mother has a tendency to be evil. No one is exactly sure why, given that the two were raised in the same environment and there was no Villainous Lineage. Maybe simply because of envy, and because the uncle will stand pretty high in the succession row.

The concept stems far back to the medieval days, where the firstborn son is the crown prince, the secondborn son is the "replacement" if the firstborn happens to die, and the thirdborn... well, he's sent off to the church. Naturally, the secondborn won't grow to like his position, in turn making this trope a corrupted version of Middle Child Syndrome — though in most media, there's only two brothers in the first place, if only to avoid cluttering up the story.

One result of this arrangement is that if the ruler dies while the heir is too young to take over, the old monarch's younger brother (i.e. the new monarch's uncle) would probably become the interim de facto ruler, and would be well positioned to take the crown permanently if something unfortunate were to happen.

This has a tendency to escalate to Cain and Abel; in fact, it almost always does. If he is from a royal family, which he frequently is, he is most commonly The Evil Prince. In those cases, he is usually the younger brother, with no children at all, while his older brother usually has at least one. He will usually end up killing his brother, thus triggering the hero's quest for vengeance. He may try to kill the hero by giving him The Quest for an Impossible Task; this is usually unwise.

A female equivalent is likely to be the Wicked Stepmother; she is unable to inherit herself, but her children can. When your mom and dad are the problem, see Evil Matriarch and Archnemesis Dad.

Can overlap with Cool Uncle (see: Evil Is Cool), in this case, the uncle himself might be a Freudian Excuse for a character's Start of Darkness or Face–Heel Turn. He rarely is a Creepy Uncle, however, though the two tropes are by no means mutually-exclusive. Contrast with Evil Nephew.

A common way to give a character a terrible childhood all in one go is to kill off their (invariably wonderful) parents and send them to live with their Evil Uncle (and/or their Evil Aunt) — the dark side of Nephewism.