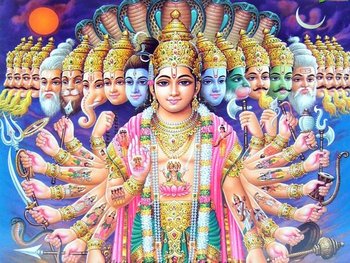 Hindu mythology is all the myths and religion of both Ancient and Modern India, used as moral allegory to convey spiritual truths. There are as many myths originating from Hinduism as there are people, so it is impossible to describe every single one.

Hinduism developed over millenia, and includes concepts and stories from many eras and cultures. The oldest stories and deities come from the numerous tribal communities who first settled the subcontinent. Most of these were transmitted only by word of mouth, but carved inscriptions have been found in the ruins of the Indus Valey civilisation, in Bhimbetka

in Central India, and in Kupgal

The documented history of Hinduism really took off after a nomadic Central Asian people known as the Aryansnote Yes, the same Aryans that Hitler thought the Germans were descended from. settled in what is now Pakistan and northwestern India. Their ‘Vedic’ Gods — the Devas — were mostly nature deities. There are strong parallels among the Vedic gods to the gods of Classical, Celtic, Norse, and Slavic Mythology as the ancient Greeks, Romans, Celts and Norse shared a common ancestral mythology with the Aryans. Indra is the leader of the Gods, and he controls lightningnote He's considered to be roughly equivalent to Zeus/Jupiter and Thor and also possibly the Slavic Perun or the Irish Dagda, depending on what interpretation you're reading; Varuna controls waternote Equivalent to Ouranos/Uranus and the Norse Ullr; Agni controls fire; Vayu controls the wind; and Surya is the god of the Sunnote equivalent to the Classical Helios/Sol—whose attributes were later appropriated by Apollo—and the Norse/Germanic personification of the Sun, Sól.

The Vedic Gods live in Heaven and continuously fight the Asuras, their evil cousins, to prevent them from obtaining immortality or dominance. note All these also have fascinating common etymological connections to stuff further west. The evil Asuras are equivalent to the good Ahuras of Zoroastrianism, while the good Devas of India correspond to the evil Daevas in Iran. This led some 19th-century historians to hypothesize that Zarathustra had personally inverted the morality of the Daevas and Asuras in creating the monotheistic Zoroastrian faith; this hypothesis may or may not have inspired Friedrich Nietzsche's thinking about the origins of good and evil, as he argued that the monotheistic faiths in general and Christianity in particular inverted traditional "ancient" morality of "good" (aristocratic, self-affirming, seeking strength in present life) against "bad" (common, self-abnegating, seeking strength in death and afterlife) and flipped them so that "bad" was now "good" and "good" was now "evil" (it's a lot more complicated, but that's the gist). The Asuras are also equivalent to the major grouping of gods in Norse myth, the Aesir, who also fought gods—the Vanir—but eventually reconciled with and incorporated their rivals. They tend to be considered subservient to the Hindu Trinity.

The Hindu Trinity is post-Vedic—and thus has few cognates abroad—and consists of Brahma the Creator, Vishnu the Preserver, and Shiva the Destroyer. Brahma is rarely worshiped in comparison to Vishnu and Shiva, but is still considered equal within the Trinity. Vishnu is mostly known for his 10 Avatars (two competing lists of ten gives eleven due to Balarama versus Buddha and the Bhagavata Purana lists 26 avatars). Shiva is known for his unorthodoxy, fierce anger, and fierce forgiveness. There is also a trinity of Goddesses – Laxmi (or Lakshmi) is Vishnu’s consort, and is the Goddess of Wealth and Prosperity; Shiva is married to the goddess Parvati, the Goddess of Strength and Courage; and Brahma to Saraswathi, Goddess of Wisdom and Knowledge. Both Shiva and Parvati show similarities to several pre-Vedic deities, such as the Indus Valley Pashupati Seal

In addition, there are a large number of regional, local and community deities. For example Kali, the fierce form of Durga/Parvati, is most commonly associated with the state of West Bengal.

The oldest Hindu sacred texts are the four Vedas note The Rig Veda, Yajur Veda, Sama Veda, and Atharva Veda. Other ancient texts are the Puranas (literally ‘ancient texts’) and the two famous epics - the Mahabharata (which includes the Bhagavad Gita) and the Ramayana. The Upanishads, the final part of the Vedas, include ontological and philosophical arguments between the different schools of the day, such as idealism, dualism and materialism.

Contrast with Zoroastrian Mythology, where the roles "daevas" and "ahuras" are the opposite. Romani Mythology is technically an offshoot of Hindu beliefs, though centuries of interaction with Christianity and other belief systems have made it relatively unrecognisable. Scythian Mythology is probably the closest to the archaic Indo-Iranian religion all of these spawned from, and indeed their queen of the gods, Tabiti, is etymologically connected to the Hindu goddess Tapati.

As a note: Mythology can be a misnomer as Mythology implies fictional stories but many Hindus believe that the literature is more historical. It's similar to how many of the stories in the Bible are considered historical by Christians as well- (i.e. Jonah and the Whale, Noah's Ark). But then again the line between a mythology and a religion has never been clear-cut or widely agreed-upon to begin with.