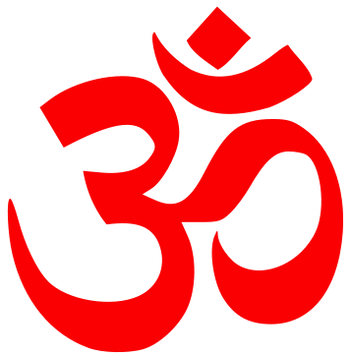 The oldest continuously-practiced religion in the world, and the dominant religion of South Asia (chiefly India and Nepal), with it also being popular in certain parts of The Caribbean (such as many areas of Guyana or Trinidad) due to the presence of Indo-Caribbean people there, certain parts of Oceania (particularly Fiji), the island countries of East Africa (especially Mauritius, which is the only country outside of South Asia to have a Hindu majority), the Arabian Peninsula (particularly Qatar and Bahrain) due to its huge amount of South Asian diaspora, and parts of Southeast Asia (especially the Indonesian island of Bali), Hinduism's roots can be traced back to Iron Age India, and as such it is believed to be the oldest living religion in the world, only contending with Zoroastrianism for some.

Hinduism stands out in popular Western belief for being seemingly a polytheistic religion, having a high number of deities and manifestations, often with many armsnote An artistic representation of how said god is omnipotent and has a hand in every aspect of one's life. In reality, the topic is much more complicated, and gets blurred further due to Hinduism not being bound by a single doctrine but rather encompassing a wide range of beliefs with their own evolution and influences each (there is no one leader of the religion, equivalent to the Pope or the Dalai Lama), to the point that it often more resembles a vast network of interconnected and semi-independent belief systems rather than a single religion unto itself. Generally speaking, however, in the same way Catholicism has the concept of the Father, Son, and Holy Spirit being different forms of the same God, most Hindu schools share a similar belief: Vishnu, Lakshmi, Shiva, Brahma, Hanuman, etc. are all different manifestations of one entity, known variously as Brahman (not to be confused with Brahma, the creator god), Ishvara, or other names, which is not a distinct father god as in Abrahamic monotheism, but rather an ultimate manifestation of the universe (of which you, your dog and your house are also part - yay!). Although Hindu Mythology contains a vast pantheon of gods and beings, they are each recognized to be an aspect/manifestation of Brahman. As a consequence, debates about how to consider Hinduism (polytheistic, pantheistic, monistic

, others, or a mix of all) have occurred for centuries and still occur today.

Hinduism is also very loose and allows acceptance of other religions. In fact, there is a passage in the Bhagavad Gita (one of the long sequence of religious texts in the Hindu faith) where Krishna himself (one of the incarnations of Vishnu and thus roughly analogous to Jesus) explicitly encourages religious tolerance, stressing that all gods are in fact part of one supreme Godhead. The Supreme God, in this case Vishnu, demonstrates this to the warrior Arjuna by allowing Arjuna to see, for a moment, Vishnu's Universal Form (Vishvarupa), which Arjuna promptly begs Vishnu to stop because Arjuna cannot grasp the true form. For this reason, the very concept of conversion does not exist in any of the Hindu texts, and those that wish to convert to the faith can do so with no ceremony, and may even keep practicing faith in another religion. On the other hand, due to modern-day inter-religious tensions, this cannot be stated as a general sentiment, and there is a significant minority that holds on to the belief that one has to be born a Hindu to be one.

This openness makes Hinduism the only major world religion that is henotheistic by nature, i.e, involving devotion to one god while accepting the existence of others. This is why most Hindu sects do not seek converts, as there is an accepted belief that the goals of spiritual life can be attained through any religion, as long as it is practiced sincerely. It is also one of the rare religions in the world that allows the practice of Atheism within itself

, and therefore holds the oldest evidence of the concept itself.

It is also common practice for a community to hold faith in a "local" god, associated with a single temple or location. On occasion these may not even have temples or even idols or statues; it might merely be the concept of a higher being, usually a protector and usually named after the location, that is believed in by the local population, with no particular rituals or prayers. Prayer locations of these deities are usually sacred groves, and there are thousands of such locations and gods scattered across India. Activities like logging and hunting are heavily prohibited in and around these areas, enforced by a combination of tradition, religious beliefs and the law. Because of this, over the years, these groves have become a haven for both rare animals and plants, as species seek shelter in them due to habitat destruction. This enrichment of flora and fauna has only added to their legend; Wikipedia actually has a page on these

As is evident from the description so far, the information provided here by no means summarizes the entirety of Hindu beliefs; as it is easily the most complex religion in the history of the world. Because of the wide range of traditions and ideas incorporated within it or covered by it, even feverently devout Hindus will have trouble coming up with a definition for the word "Hinduism" itself.

Major Hindu sacred texts include the Mahabharata, Bhagavad Gita, Ramayana, and Upanishads. The above are Older Than Feudalism, but the four Vedasnote The Rig Veda, Yajur Veda, Sama Veda, and Atharva Veda are Older Than Dirt, and the Puranas are only Older Than Print.

Hinduism is classified under the Dharmic religions, which also include Buddhism, Sikhism, and Jainism. The other three are offshoots from Hinduism, in the same way that Christianity and Islam are offshoots from Judaism. Romani Mythology is technically an offshoot of Hindu beliefs, though centuries of interaction with Christianity and other belief systems have made it relatively unrecognisable.

The Schools of Thought and the Works

While Hinduism has been variously described as both a faith and as a way of life, and is incredibly diverse, there are a few general concepts that most (though not all) Hindus hold in common.

There are several traditions within Hinduism. The modern faith is quite different from the ancient one. The pantheon is from Vedism (or the 'historical Vedic religion'), which is very different from modern Hinduism. It's somewhat similar to Classical or Norse mythology, and it's briefly described below. For all intents and purposes, it is treated as a separate faith. The modern religion has several branches, four of which are the most dominant. These four sects each focus on a different interpretation of Ishvara (the Supreme Being). The two most common ones are described below.

According to two of the four major Hindu sects described above, the universe was born from Lord Brahma (The Creator), maintained by Lord Vishnu (The Preserver), and governed by Lord Shiva (The Destroyer), in the sense that after the age of man is over, the world will be destroyed to unite all individual souls with the Supreme Consciousness. The three together form the Great Trinity, more popularly known as the 'Trimurti'note त्रिमूर्ति trimūrti of Hinduism. So not even a question as straightforward as "Who's the Top God?" gets a simple answer in this religion.

Both Vishnu and Shiva are widely popular among Hindus as deities (each viewed as the Supreme Being in their respective sects), to the point that there has been some friction between the devotees of the two. Vishnu is arguably the better known, probably because of the vast amount of mythology surrounding Vishnu and his Avatars. Since the maintenance of the world is his responsibility, Vishnu will incarnate as an Avatar whenever evil rises, to bring balance to the world. Prince Rama, Lord Krishna, and Vamana are some of the popular incarnations of Vishnu. Rama's story has been chronicled in the Ramayana, and Krishna's in the Mahabharata, a part of which is the Bhagavad Gita.

Apart from the Trinity, there are also a number of younger gods or Devas, who occupy the heaven, known as Swarga. These gods are mostly confined to Vedism (the predecessor to modern Hinduism), which is significantly different from the modern faith. Outside of folk religion and revival movements, they are no longer worshiped.

Within Vedism, almost every entity in nature has a corresponding god or goddess - Agni (Fire), Vayu (Wind/Air), Varuna (Water & Sky), Surya (Sun), Chandra (Moon), Bhumi (Earth), etc. Indra is the King of the Gods, and Lord of Swargaloka, which is Heaven. Narakaloka is the opposite, and is Hell. Naraka's lord is Yamadharmaraja (literally means Yama the most just). He is not evil and takes no pleasure in punishing though - he just assigns them to Swarga (Heaven) or Naraka (Hell). Yama is the son of Surya(Sun).

The concept of the Devil, i.e; a central being that causes all evil, does not appear in Hinduism. Simply put, such a kind of character simply doesn't exist in the mythology. Instead, Hinduism states that good and evil exist inside all creatures, and, according to the path one chooses, their fate will be determined. This is where Karma comes into play - in accordance with your actions, in your next life, you will be born as a lesser or higher being. Though demonic creatures do exist in mythology, even they are never portrayed as Always Chaotic Evil - not even Ravana and Duryodhana, the Big Bad of the Ramayana and Mahabharata, ever comes off as pure evil.

Countries Where Hinduism is Popular