Figure It Out Yourself 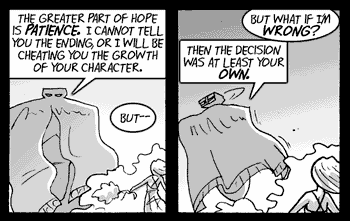 This trope occurs when one character asks for information and another character simply refuses. The Only Way They Will Learn is to discover the answer for themselves. Just telling them would defeat the purpose.

This trope is often used by The Mentor and its subtropes. It is all fine and dandy to teach them how to do whatever it is that they teach, but the student eventually has to find their own answers. The Trickster Mentor enjoys keeping him in the dark, of course, but also because it would mean nothing if they just told the student the solution to the mystery. Likewise, the Zen Survivor works exactly like this, because some things cannot be explained, only realized and understood.

If the person is The Chooser of the One it may be a test to see if the character is in fact worthy of the title of chosen one. It could also be that finding the Call Reception Area is part of how one proves their worth to the Sword of Plot Advancement in the center of it; being told how to get there instantly disqualifies them.

In other cases, characters who really shouldn't have any motives to keep this information secret from the character do this. Though they frequently claim that making the hero work through things by himself is a necessary learning experience, it may be just because the writers need to pad out the season.

It is commonly uttered by Time Travellers since solving people's problems for them would change history... except when it doesn't or already has, or makes everything implode. Time Travel is funny that way. So no straight-answers from your future-self, or whatever.

An Oracular Urchin will get out of de-cryptifying their Cryptic Conversation this way. Likewise heroes and super heroes with a Secret Legacy might be overjoyed to find out they're not the black sheep of their family, but wonder why mom and dad never helped out before.

This trope is used in almost exactly the same places and situations as "You Are Not Ready", with the implication that the act of working the information out is the only way to make yourself worthy of it. This is the intellectual version of Helping Would Be Kill Stealing. See Be as Unhelpful as Possible for characters trying to avoid incrimination. Often couched within a Cryptic Conversation. Can cross over with This Is Something He's Got to Do Himself, if these mentors prevent others from aiding the hero. Compare Never Give the Captain a Straight Answer. See also Sink or Swim Mentor.