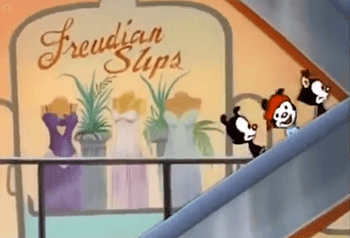 Those slips are perfect for lingerie—I mean lounging in.
"The kids got the cartoon. The parents got the jokes."
— Henry Rollins
Advertisement:

A joke in a work marketed toward children that kids of the appropriate age would likely never get, but which their parents would. Serves as a way to keep the adults and older kids entertained and usually takes the form of a Homage to a movie or TV show that children would not normally be familiar with. This is the master trope to other "subliminal" tropes like a Double Entendre, Does This Remind You of Anything?, No Celebrities Were Harmed, or Getting Crap Past the Radar. It could also count as a Genius Bonus since most children would have to be educated above their general age level to understand these.

Popularized by Sesame Street,note The first decade of the show, an actual mission of the show was 'Entertain the parents so much, they force the kids to watch!' with characters like Sherlock Hemlock and the Count, and thus most common on educational shows. Surprisingly, the barely intelligible Cookie Monster seems to get the most Parental Bonus lines, at least in recent history: "Me undergo sea-change," etc.

Of course, a badly done Parental Bonus will entertain neither the kids nor the adults and may terrify the latter that the former actually will "get" it...

Golden Age animated shorts, especially those from Fleischer Studios and Warner Bros., often had material which would be considered Parental Bonus today (if people still got the references), as they were intended for all audiences (see Animation Age Ghetto). As a result, many cartoons had numerous double entendres and pseudo-cameos which were expected to go over the younger viewers' heads.

These jokes also give the shows rerun value years later when the original viewers are old enough to get the jokes that once went over their heads: see Late to the Punchline. Might be Fridge Horror for some if they think the joke is disturbing and that supposedly lewd joke might just be Accidental Innuendo.