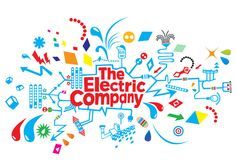 "Feel the power, yo, and plug it in!"
Advertisement:

From 2009 to 2011, The Electric Company (1971) received a Retool on PBS Kids (often referred to as The New Electric Company) that introduced a cohesive episode-to-episode plot while still retaining the sketch comedy elements. The new series was based on a group named after/for the show, consisting of four teenagers using the power of the "Word Ball" to protect the neighborhood from the Pranksters, a group of small mayhem-loving teenagers. (See the "Characters" link at the top of this page for tropes relating to each character.)