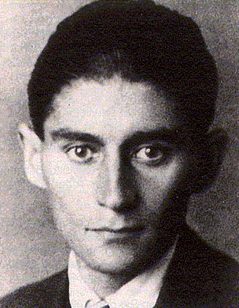 A book must be the axe for the frozen sea inside us.
"Anyone who cannot come to terms with his life while he is alive, needs one hand to ward off a little his despair over his fate... But with his other hand he can note down what he sees among the ruins."
Advertisement:

He was born in Prague, Kingdom of Bohemia, Austria-Hungary (nowadays' Czech Republic). His unique body of writing—much of which is incomplete and was mainly published posthumously—is among the most influential in Western literature. His stories, such as The Metamorphosis (1915), and novels, including The Trial (1925) and The Castle (1926), concern troubled individuals in a nightmarishly impersonal, modern, and bureaucratic world.

Kafka is based on his works, albeit loosely.

Works by Franz Kafka with their own pages include:

Other works by Franz Kafka include examples of:

"The critics deplore that in the three Kafka novels many intermediate chapters are missing, but recognizes that those chapters are not essential. I have for me that this complaint indicates an essential ignorance of Kafka's art. The path of these "unfinished" novels is born specifically of The Infinite number of obstacles that stop and return to stop their identical heroes. Franz Kafka does not finish them, because the main thing was that they were endless. Do you remember the first and clearest of Zeno's paradoxes? The movement is impossible, because before reaching B we must cross the intermediate point C, but before reaching C, we must cross the intermediate point D, but before reaching D ... The Greek does not list all the points; Franz Kafka does not have to list all the vicissitudes. It is enough to understand that they are infinite like Hell".