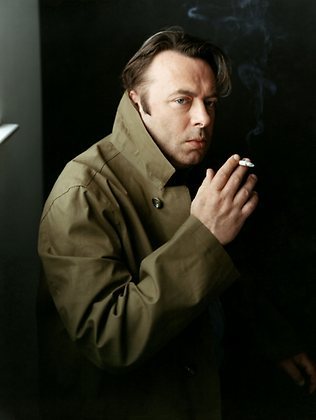 Not actually John Constantine.
"The mark of an independent mind is not what it thinks, but how."
Advertisement:

Christopher Eric Hitchens (13 April 1949 – 15 December 2011) was an English-American author and journalist whose books, essays and journalistic career spanned more than four decades. He was a columnist and literary critic at The Atlantic, Vanity Fair, Slate, World Affairs, The Nation and Free Inquiry, and became a media fellow at the Hoover Institution in September 2008. He was a staple of talk shows and lecture circuits. In 2005, he was voted the world's fifth top public intellectual in a Prospect/Foreign Policy poll. He was the older brother of fellow journalist and author Peter Hitchens.

He was best known in recent times for his strong and vocal opposition to religion. Demonstrated, among other places, in his 2007 book god Is Not Great: How Religion Poisons Everythingnote In Britain the book was published with subtitle "The Case Against Religion". Note that the title uses a lowercase "g", though this is sometimes not noticed., and he is considered to be a founder of the "New Atheism" movement.

Although admired for his speaking and writing, you'd be hard pressed to find someone who could always agree with him. Hitchens began his political career as a socialist, but broke with the left in the 1990s. He began to moderate his views on economic policy and promote interventionist foreign policy, which sometimes led to him being called a neoconservative, even though he was hardly a political conservative. He supported the Iraq War and never regretted it (although he would later criticize the way it was conducted), but in contrast to the neoconservative camp, he was critical of Israel, though he also made no secret of his disdain of Saudi Arabia, Hezbollah, Hamas and Iran, Israel's main rivals/enemies. Many of his stances came as a result of his opposition to religion.

He died in a Houston hospital on December 15, 2011 from complications relating to esophageal cancer.