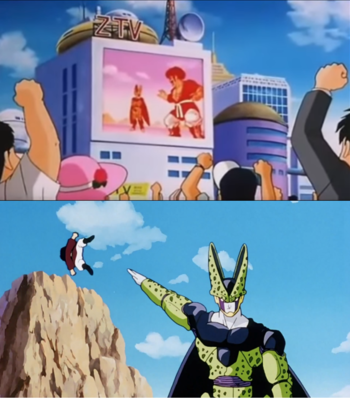 Mark Satan, the Badass Normal who defeated a Cyborg Conqueror from the Future. The part where the real heroes …um, did the actual defeating work didn't make the airwaves, sadly.
"In the half-dozen years since my arrival, I'd been temporarily seconded to units assigned, among other things, to assault fixed positions, clear out a space hulk, and run recon deep behind enemy lines. And every time I'd made it back alive, due in no small part to my natural talent for diving for cover and waiting for the noise to stop, the general staff had patted me on the head, given me another commendation, and tried to find an even more inventive way of getting me killed."
— Commissar Ciaphas Cain, HERO OF THE IMPERIUM!!!, For the Emperor by Sandy Mitchell
Advertisement:

A character touted as a brave and mighty warrior, despite it being complete hogwash. The best this character can manage is to be the Unknown Rival, although the viewers are totally aware it's no contest, and oftentimes, he has Feet of Clay.

Sometimes this character is just duplicitous, but is allowed to claim the title to keep the Masquerade going for the greater good. Sometimes, he's simply in the right place at the right time. Sometimes, rumor ran away with scraps of information, and his efforts to correct it lead only to a reputation for modesty. And sometimes, he is a downright Villain with Good Publicity who does nasty things to keep up his hero image.

An All-Loving Hero, of course, has no problem with them taking the credit, though the Naïve Newcomer may be shocked to find him not everything the legend says he is.

The false attribution can occur on-stage, with the Fake Ultimate Hero getting credit for what has happened, generally over the actual character who did it, or off-stage, where the characters learn the truth (often the hard way) but the true heroes of those incidents are not characters.

The "false hero" who tries to claim the reward of the hero is a stock character of the Fairy Tale. After the Engagement Challenge, he shows up with the dragon's head or threatens the princess until she agrees to support his claim. A frequent problem for him is that while he has the heads, the hero cut their tongues out first. Others steal what he won on his quest.

A variant is to present this individual as a semi-sympathetic protagonist who will usually acknowledge himself that he's not all he's made out to be. Sometimes, however, their actions will make you wonder if they're just putting themselves down a little too much... And sometimes they'll even end up becoming a Real Ultimate Hero, though not always in the conventional way.

Compare Glory Hound, Accidental Hero. Not to be confused with Decoy Protagonist. Miles Gloriosus is when this guy has absolutely nothing to back his stories up, while Badass on Paper is when this guy actually did do the deeds he's credited with, but the reality falls short of his reputation. Engineered Heroism is when someone tries to be this guy by causing the disasters in the first place. It is a subtrope of Paper Tiger.

May overlap with Nominal Hero if the character's intentions aren't heroic either.

The Order of the Stone

Soren reveals that the Order lied about how they defeated the Ender Dragon. Rather than a big, epic battle, Soren just cheated by using the Command Block to erase it from existence. When Jesse finds out, he is not happy.

The Order of the Stone

Soren reveals that the Order lied about how they defeated the Ender Dragon. Rather than a big, epic battle, Soren just cheated by using the Command Block to erase it from existence. When Jesse finds out, he is not happy.