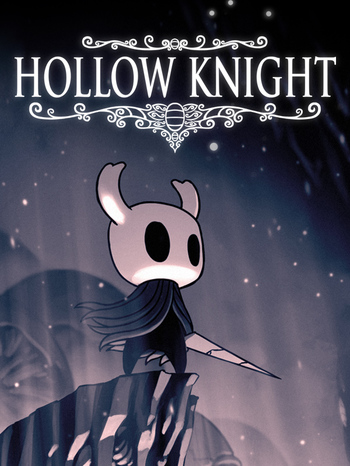 In wilds beyond they speak your name with reverence and regret
For none could tame our savage souls yet you the challenge met
Under palest watch, you taught, we changed, base instincts were redeemed,
A world you gave to bug and beast as they had never dreamed
—from "Elegy for Hallownest" by Monomon the Teacher
Advertisement:

Long ago, a great and powerful being known only as the Pale King once ruled over Hallownest, a vast and ancient land of bugkind buried deep underground. Though long fallen to ruin after a dimly-remembered catastrophe, explorers and thieves still brave its dark roads, its caverns and towers, searching for riches and wonders. Lately, though, something has changed. Villagers and explorers venturing into the caverns have stopped returning. The caverns throb and tremble with a savage energy that sends creatures mad with rage and robs explorers of their memories.

As the enigmatic knight, players journey through the fallen kingdom of Hallownest in search of their origins, finding new areas, challenging several enemies and bosses, and gaining new abilities along their travels. The game is a platformer focused on exploration, featuring simple but fairly hectic melee combat, as well as finding and equipping several ability-enhancing charms to augment the protagonist. The world is very open-ended, and acquiring a new power often opens up several new areas to explore in classic Metroidvania fashion. There's also a heavy focus on boss battles, with unique and challenging mandatory bosses plus over a dozen extra bosses in obscure places, with more extra challenges for the dedicated player.

In short; what would you get if you took the adorable insects from A Bug's Life and put them in the ruined, oppressive Dark Fantasy world of Dark Souls?

You'd get something like Hollow Knight, a hand-drawn 2D action Metroidvania created by Australian developer Team Cherry, after a successful Kickstarter campaign

. It was released in February 2017 for PC via Steam. A Nintendo Switch port was released on June 12, 2018. A version with the subsequent free updates called Hollow Knight: Voidheart Edition was released for PlayStation 4 and Xbox One on September 25, 2018.

Over the course of its update history, the game has released four free expansion packs:

Aside from the game, there are also some secondary products:

The plot of the game, focusing on the fall of the kingdom of Hallownest, is explained via Story Breadcrumbs, with much of the character motivation, backstory, and purpose left to the player's imagination, if not intentionally cryptic in tone and open to a lot of interpretations. With that in mind, take entries detailing the lore of the setting with a grain of salt.

The game is Troperiffic as it is. But since the usage of the term "Hallownest" is interchangeable to refer to both of the game's location/landscape/setting and as a collective term for the In-Universe Kingdom of Hallownest and its denizens, there is now a separate subpage for the setting tropes and general character tropes as listed here. Likewise, most of the character-exclusive tropes are listed in their appropriate subpages here, while gameplay tropes limited to the Player Character's mechanics are listed here.

On February 14, 2019, it was announced that the game will have an upcoming sequel starring Hornet, called Hollow Knight: Silksong.

Higher Beings, these tropes are for you alone:

open/close all folders
Tropes # to G
Tropes H to Q
Tropes R to Z
No cost too great
No mind to think
No will to break
No voice to cry suffering
Born of God and Void
You shall seal the blinding light that plagues their dreams
You are the vessel
You are the Hollow Knight.
Feedback

If you choose to save Zote in Hollow Knight, he only gets mad at you and claims that he was in no danger, despite clearly being in the middle of getting eaten alive when you come across him.

If you choose to save Zote in Hollow Knight, he only gets mad at you and claims that he was in no danger, despite clearly being in the middle of getting eaten alive when you come across him.